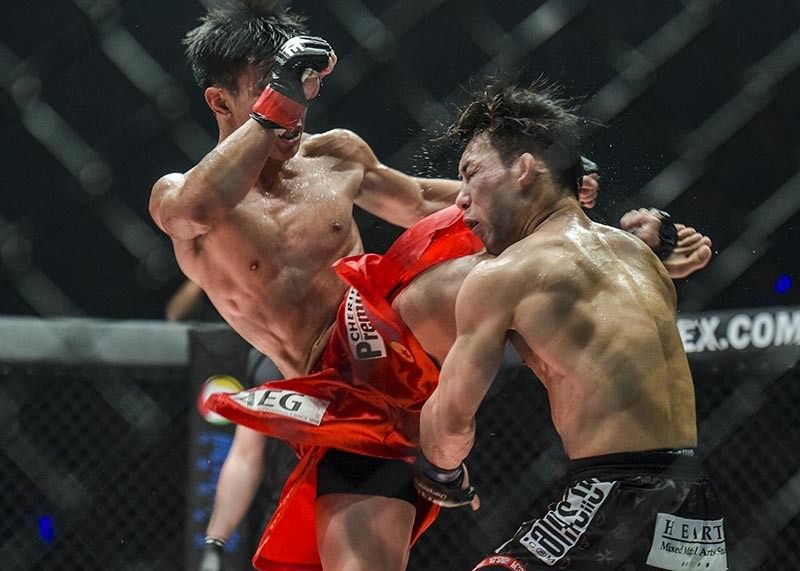 GOODNIGHT. Joshua Pacio’s highlight reel knockout of Yosuke Saruta in their title rematch in April this year was named as ONE Championship’s top knockout list. (ONE Championship photo)

JOSHUA Pacio, aside from being the king of the strawweight division, also topped ONE Championship’s top 100 knockout list.

Pacio, of the famed Team Lakay who recently reclaimed his world title by stopping Yosuke Saruta in the fourth round, was named the best knockout of the promotions which curated the definitive top 100 countdown of highlight-reel stoppage.

Joining Pacio in the list who are on the top 10 is fellow Team Lakay and former bantamweight world champion Kevin Belingon at number seven after beating Andrew Leone with his highlight reel spinning back kick and ground and pound.

Another Team Lakay fighter, former lightweight world champion Eduard Folayang is in the eighth spot when he won the title in 2016 against Shinya Aoki with a third round beating.

Edward Kelly’s 21 second stoppage of Meas Meul earned him a spot in the top 100 at number 21 and 41st when he finished Vincent Latoel in just 57 seconds while former featherweight world champion Honorio Banario’s conquest of Jaroslav Jartim.

Geje Eustaquio’s first round punch and soccer kick of Saiful Merican also earned him a spot at the top 100 at 42nd.

Pacio also earned a spot at the 25th when he stopped fellow Filipino Roy Doliguez.

One Championship reviewed more than 350 finishes in all of its events for the past seven years from mixed martial artists’ punches, kicks, knees, elbows, and slams brought scores of stoppages.

At fourth is Vitaly Bigdash stoppage of Igor Svirid while at fifth is Cosmo Alexandre knocking out Sage Nortcutt.

Other notable names in the top 10 are Martin Nguyen, Brandon Vera and Jo Nattawut.