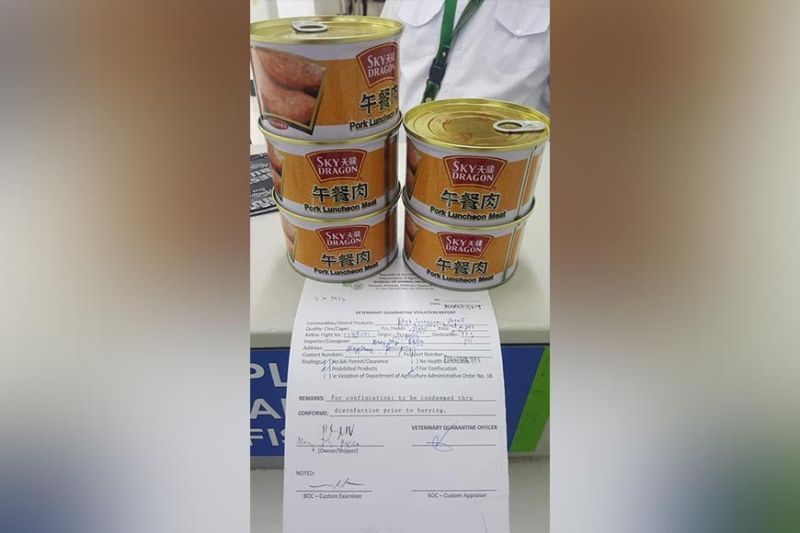 THE Bureau of Animal Industry (BAI) has confirmed that the canned goods confiscated at the Clark International Airport were found positive for African Swine Fever (ASF).

Agriculture Secretary Manny Piñol confirmed the findings of the BAI as he posted the report of Dr. Rachel R. Azul of the BAI Virology Section on his Facebook page on Friday.

The confiscated canned goods were brought in from Hong Kong by an overseas Filipino worker.

Piñol was quick to note, however, that no ASF infections have been reported in pigs in the country. He said detection of the virus in the seized products does not change the Philippines’ ASF-free status.

The BAI said the viral DNA was isolated in pork luncheon meat and was tested using the ASF Taqman PCR Assay at the ADDRL.

The seizure is a warning to the industry and an acknowledgment of the catastrophic threat on our doorsteps, Dr. Azul said in her report.

“If introduced, ASF would have a significant impact on pig health and production and contribute to enormous economic losses,” Azul added.

Swine flu is an infection thought to have been caused by an Ornithodoros, a type of soft-bodied tick. The hogs are infected if they are bitten by the tick which then contaminates their blood.

While the virus has no effect on humans, the DA said there is a need for strict monitoring at airports and seaports in order for the virus not to enter the country and devastate the swine industry.