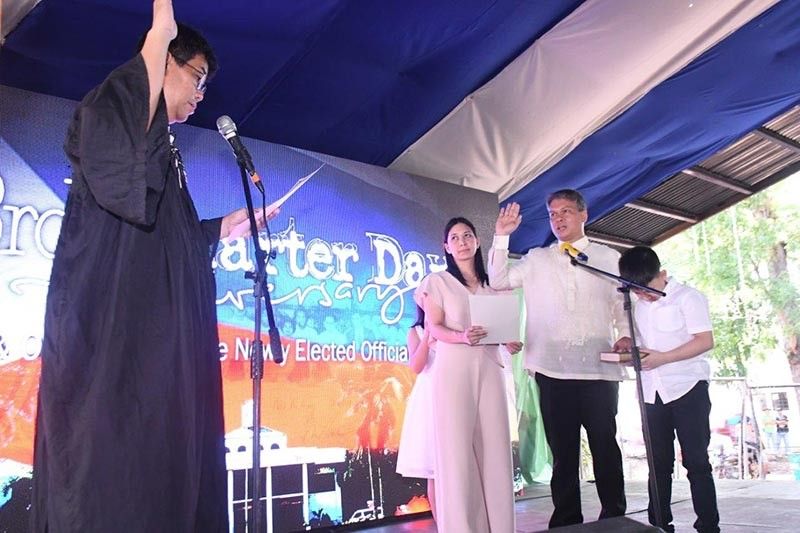 MAYOR Alfredo Marañon III urged the Sagaynons to stay united and be responsible citizens as he took his oath of office for his third term as the city head in time with the 23rd Charter Anniversary at the Taliambong Gymn, Sagay City on June 11.

Marañon in his charter day message encouraged the Sagaynons to do their share as responsible citizens in pursuit of his administration’s sustainable progress and seek their support as he continue to serve the city.

“All our dreams and aspirations for a progressive city and prosperity for all Sagaynons can be achieved if we stay united and do our share as responsible citizens,” he said, adding “Sagay City can only be better if we acknowledge our shortcomings and work hard to provide long-lasting solutions.”

This is the third term of Marañon as mayor, which also coincides to the retirement of his father, the outgoing Negros Occidental Gov. Alfredo Marañon Jr.

Governor Marañon was the guest speaker of the charter day event and led the oath of office of the 10 elected councilors and Vice Mayor Narcisso Javelosa Jr.

Mayor Marañon, in his speech, highlighted his priority programs for the city in the next three years.

Among the big projects he stated were the completion of A.E. Marañon Sr. District Hospital, completion of ecozone, expansion of the P154 million Sagay Feeder Port, establishment of slaughterhouse for cattle, carabao, and small ruminants, and construction of Rural Health Unity, Sagay City Livestock Farm, Macahulom Reef Watchtower, and more farm to market roads and bridges.

He also presented to the constituents his administration’s achievements during his previous term in the areas of agriculture and veterinary services, infrastructure, education, sports, economic enterprise, health services, nutrition, peace and order, culture and the arts social services, and tourism.

Marañalso said that he is grateful for the support and cooperation of the Sagaynons, the police, national government agencies, schools, and other stakeholders.

“I don’t believe that infrastructure alone defines true progress. We need to develop our people and continue to work on inclusive growth while maintaining a sound biodiversity,” he said.

Representative Cueva also vowed to continue in seizing every opportunity to continue his mandate as the congressman of the second district.

In his speech, he recalled how Sagay City progressed through its people joining hands in making it happen.

He said that as Sagay enters its 23rd year as a city, he assured to fulfill his legislative duties under a firm policy of transparency and utmost professionalism.

Cueva also promised to refocus on his legislative efforts to raise the moral standards in the service, the most important foundation of good governance.

Meanwhile, Vice Mayor Javelosa also said that as Sagay unfolds a new chapter, he urged its citizens to be resilient and dedicated to working for the good of the city.

During the ceremony, Service Awards were also given to outgoing Sangguniang Panlugnsod Members, Donato D. Maranon, Jose A. Frange, and Santiago D. Bitera, who served the city for 3 consecutive terms.

Top taxpayers in Sagay City in 2018 were also honored in the event, where Mayor Marañon, Javelosa, and City Treasurer Juvy Pinonggan presented plaque of recognition.

Various activities were also slated for the 23rd Charter Anniversary celebration which capped on June 12, during the Philippine Independence Day celebration.

The charter anniversary event was also highlighted by the recital of various Sagaynon kids that excel in various fields of performing arts.

Among the performers were the kids who attended the annual Kinaadman Summer Workshop of the city government, winners of the Voice Idol of Sagay, and Sagay National High School Special Program in the Arts students. (PR)