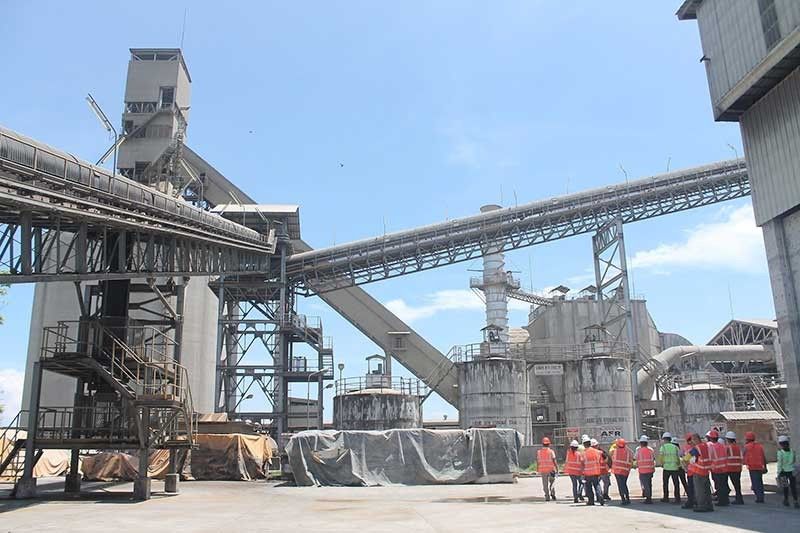 CAGAYAN DE ORO. Members of the media are given a one-day pass by Holcim Philippines inside one of their cement plants in Lugait, Misamis Oriental on June 14. Inside, operators show how the Processed Engineered Fuel (PEF), a composition of waste chunks are used to run the cement factory. In May, containers from Australia arrive in Mindanao International Container Terminal in Tagoloan, Misamis Oriental, which carried wastes declared as PEF and consigned by Holcim. The Bureau of Customs wants it shipped back for "misdeclaration," but Holcim maintained that PEFs are environmentally non-hazardous. (Jo Ann Sablad)

HOLCIM Philippines Inc. reiterated that there is "no misdeclaration" that the containers vans shipped from Australia carried "Processed Engineered Fuels (PEFs)" which are used to run as power source for its cement plants

According to Frederic Vallat, Holcim Philippines' vice president for Alternative Fuels and Alternative raw material and head of Geocyle, in a brief presentation during a media tour on Holcim's plant in Lugait, Misamis Oriental last Friday, June 14, the Tariff Commission has classified the shipment as PEFs as stated in a document dated June 4, 2019.

In May, containers from Australia arrive in Mindanao International Container Terminal in Tagoloan, Misamis Oriental, which carried wastes declared as PEF and consigned by Holcim. The Bureau of Customs wanted it shipped back for "misdeclaration," but Holcim maintained that PEFs are environmentally non-hazardous.

"You can see here that there is no misdeclaration. It clearly says that it’s Processed Engineered Fuels. And this document is coming from the Tariff Commission," Vallat said as he presented the said document to the media.

"In the definition, it says that they cover different thing as municipal waste," he added.

The Tariff Commission, as stated in the document, described the shipment containing PEFs as "a plastic based fluffy fuel with high calorific value consisting by weight, 75-85 percent flexible plastics, paper and natural and hydrocarbon based fibre, 7-15 percent hard plastics, 1-5 percent wood and <1-5 percent non-combustible inert material in the form of solid flakes (range of particle sizes less than 50 mm), mixed colors with natural odour."

It further said that the PEF has the chemical analyses of gross calorific value of 5,700 to 7,200 kcal/kg, 15 percent ash content, 20 percent moisture, 1.5 percent sulfur and 1 percent chlorine.

"It is obtained from waste materials passing through series of magnetic separator and shredder. Imported in bulk packaging, it is used as a coal substitute in industries such as cement manufacturing," as stated in the document.

Municipal wastes generally contains a large variety of materials such as plastics, rubber, wood, paper, textiles, glass, metals, food materials, broken furniture, and other damaged or discarded articles, according to the Tariff Commission.

"All the tons of PEF that we have imported, all of them have been declared under this qualification according to the Tariff Commission classification. This is the reason why we said that there is no misdeclaration about what we import," Vallat said.

Vallat also presented another document from the Environmental Management Bureau (EMB) addressed to the Bureau of Customs (BOC) reiterating the former's previous decision "interposing no objection" to the importation of the PEFs and to be used as an alternative fuel in cement production "since it is declared as a product which has undergone preprocessing in Australia prior to export to the Philippines."

"Likewise, it confirms with the waste acceptance criteria of Holcim Philippines Inc. pursuant to Section 4 of DENR (Department of Environment and Natural Resources) Administrative Order 2010-06: Guidelines on the Use of Alternative Fuels and Raw Materials in Cement Kiln," it added.

Vallat said that at present, Holcim has stopped the importation of PEFs from Australia and they are now in the process of clarifying with the BOC.

"We are going to analyze, with the third party the PEF will be demonstrated, it's not municipal waste as they say," Vallat said.

He also said that they prefer to have a local source, however there is a lack of supply in the area, with only 7,000 tons collected last year when the plant needed 50,000 or 60,000 tons.