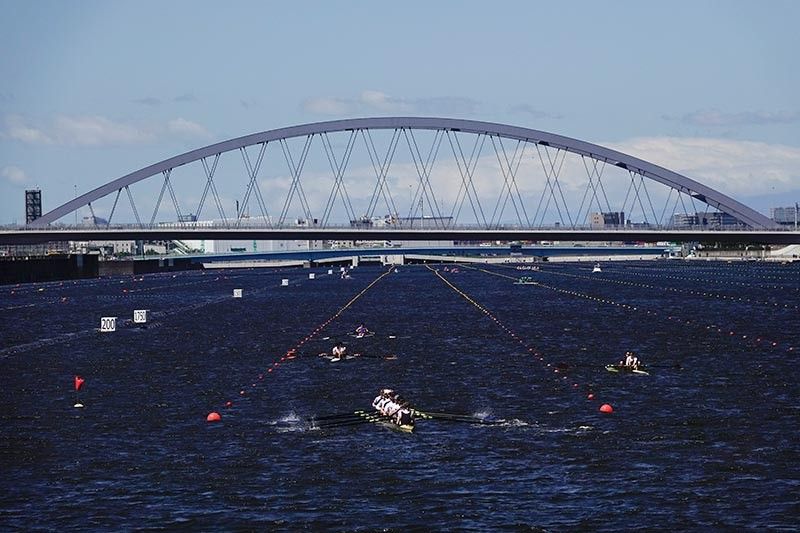 Rowers prepare for a test run at the Sea Forest Waterway, a venue for rowing at the Tokyo 2020 Olympics, Sunday, June 16, in Tokyo. (AP)

TOKYO -- Organizers opened the rowing venue for next year's Tokyo Olympics on Sunday, June 16, highlighted by a race between alumni crews from Oxford and Cambridge — the two English universities that famously square off each year on the Thames in London.

The new venue is located in Tokyo Bay and is ready to go with the Olympics still 13 and a half months away.

Oxford won the race this time.

The rowing venue, which will also be used for canoe sprint, joins several other new venues that have been completed for Tokyo.

The rowing site offers a panoramic view of the city — and Mount Fuji on a clear day — and was built behind dams and water gates to protect from waves and tides.

Built by the Tokyo Metropolitan Government, the venue will have seating for 2,000 that can be increased to 16,000 for the Olympics and Paralympics.

The rowing site has been free of water-quality issues, which plagued rowing and sailing in the 2016 Rio de Janeiro Olympics.

Like many venues built for niche Olympic sports, it could be pressed to find frequent use once the Olympics and Paralympics have come and gone.

The first regatta will be the World Rowing Junior Championships in August, which will serve as a test event for the Olympics.

The Tokyo Olympics and Paralympics will use eight news facilities, the most famous of which will be the new $1.25 billion national stadium, and the new venue for swimming, with both still under construction.

Tokyo is also using 25 existing venues, and 10 additional venues it classes as temporary.

Although exact costs are difficult to track, Tokyo is believed to be spending at least $20 billion to prepare for the Olympics. About 70 percent is public money. (AP)