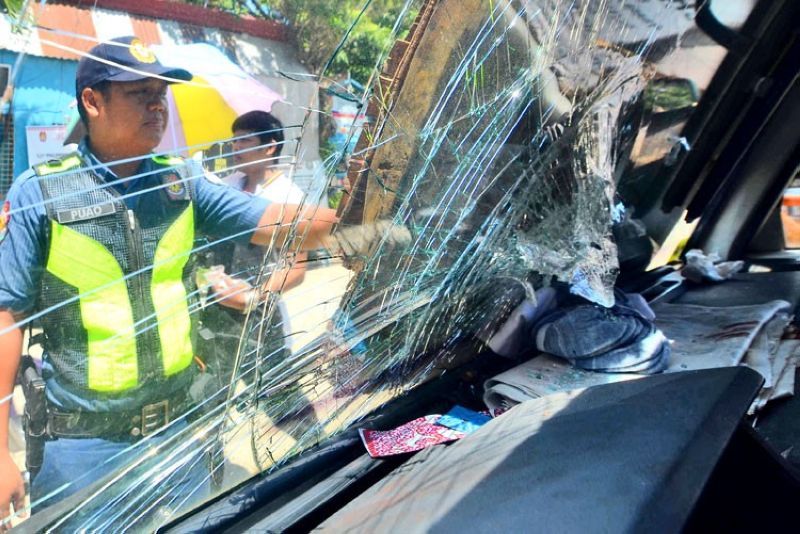 CEBU. A policeman examines the broken windshield of the truck owned by murdered Chinese national Yi Feng Guo Yang. Yang, 51, was driving his truck with his two kids when unidentified men onboard motorcycles ambushed them in Barangay Cubacub, Mandaue City on the evening of Father's Day, June 16. Police believed the ambush may have been related to Yang's business dealings. (SunStar photo/ Alan Tangcawan)

A 51-YEAR-OLD Chinese national was killed, while his two kids were hurt after unidentified men reportedly fired upon the truck they were riding in Barangay Cubacub, Mandaue City on the evening of Father's Day, June 16.

Yi Feng Guo Yang, 51, succumbed to his wounds just before he was brought to a private hospital in Cebu City.

His two children, Ginabelle, 18, and Stefhen, 16, only sustained minor injuries and are out of danger.

In a report provided by the Mandaue City Police Office (MCPO), Yang and his two kids were onboard a truck and headed to Vista Montana Subdivision in Barangay Cubacub when the unidentified men onboard two motorcycle fired upon them.

Police recovered from the crime scene three empty shells of 9mm pistol, two empty shells and two live bullets of .45 caliber pistol, and a black helmet believed to be owned by one of the assailants.

Police are still conducting investigation to identify the person behind the attack.

They are also looking at the possibility that the ambush may have been related to Yang's business dealings. (From FMD of Superbalita Cebu)