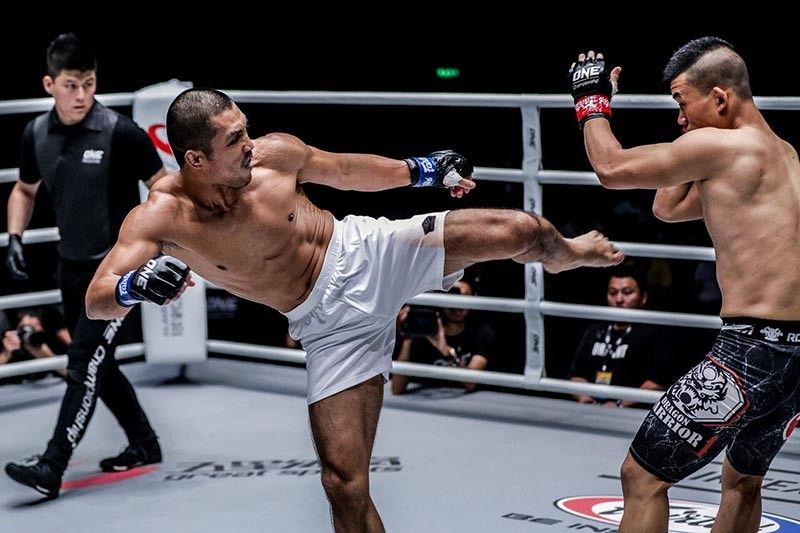 BAGUIO. Eric Kelly displays his striking skills against Niu Kang Kang of China but fell short in One Championship's Legendary Quest on June 15, 2019 in Shanghai, China. (One Championship photo)

DESPITE a spirited effort, Eric Kelly fell short against a younger opponent in One Championship's Legendary Quest, on June 15 in Shanghai, China.

Kelly came charging into the fight but his effort was not enough as he fell to hometown hero Niu Kang Kang in their featherweight contest.

The 23-year-old battled his way through three rounds against the Filipino veteran to score a unanimous decision win in front of his fans inside the Baoshan Arena in Shanghai.

Niu made a statement as soon as the opening round got underway as he landed a high left kick. Aware of his opponent's knockout power, Kelly took the contest to the ground but his success did not last long as the Chinese martial arts prospect transitioned brilliantly to get hold of Kelly's back and begin his hunt for submissions.

When Kelly got back to his feet, he was put under threat again by a guillotine choke at the start of another sustained ground attack.

Niu came charging forward anew in the second round with a spinning back fist, but his 37-year-old adversary evaded with ease. Once again, Kelly took the match to the ground to stay clear of his opponent's power, but gave up his back again to concede his advantage.

The Chinese fighter quickly found an opening to go for a rear-naked choke, but Kelly refused to give up his chin and continued to frustrate the Chinese athlete until the end of the second round.

Kelly was on the back foot for most of the first two rounds, and knew he had to do something special to secure the win with five minutes remaining. He started the final stanza with a bang when he landed a couple of kicks before he secured half guard in the center of the ring.

However, Niu brilliantly worked his way through another escape and turned the tables on the ground to make his way to side control, where he landed punches and elbows. He finished the encounter with back control to secure the win.

Yoon brought the action to the ground almost immediately, but instead found himself in a submission attempt from the Filipino welterweight veteran.

The Korean was able to power out of the submission and began to light Tan up with thunderous knees and precise punches to take the Filipino out and earn the highlight-reel stoppage.

Japanese newcomer Itsuki Hirata was spectacular in her ONE Championship debut as she steamrolled through the Philippines' Angelie Sabanal by first round submission.

Hirata used her crisp striking to keep Sabanal, a National Muay Thai Silver Medalist, at bay before eventually getting the takedown. On the mat, it was all Hirata as she maneuvered into a tight Americana armlock, leaving Sabanal with no choice but to tap out. (Roderick Osis)