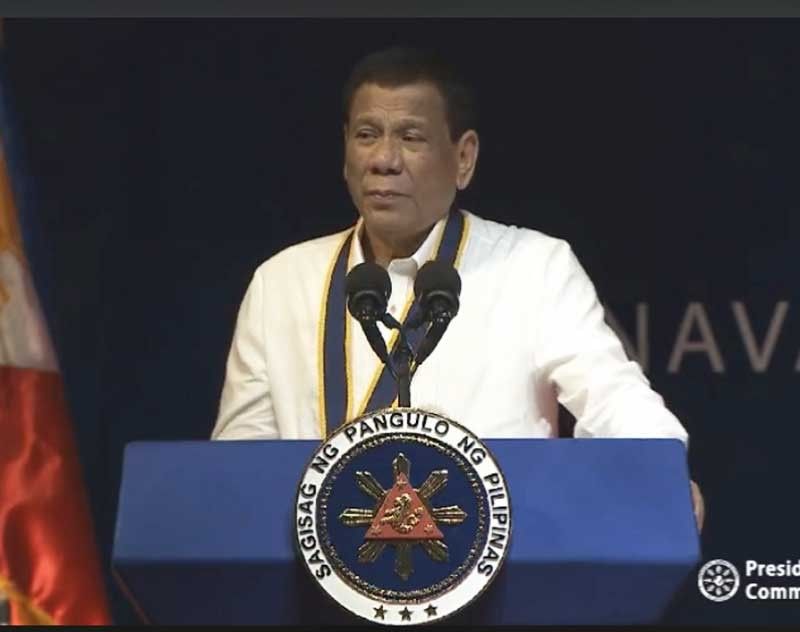 PRESIDENT Rodrigo Duterte on Monday, June 17, 2019, downplayed the Recto Bank incident and warned against sowing tension with China because the Philippines is "not ready to go to war".

In a speech during the 121st anniversary celebration of the Philippine Navy in Cavite City, the President soft-pedalled the issue, describing it as a mere "maritime incident" that should be investigated.

(About the collision, that is a maritime incident. Do not believe the stupid politicians who want to send the Navy to the disputed sea. You do not send gray ships there. That's just a mere boat collision. Do not make it worse because that's a fertile ground for [war].)

"The only thing that we can do is to wait and give the other party (China) the right to be heard. Importante iyan (That's important)," Duterte added.

Duterte said declaring war against China would be the "most stupid" decision he would make.

"Now, you go there and create a tension, I said hindi ako gago na Presidente na papayag (I am not a stupid President to allow that). If we have to die, we must have to die in the correct way and to die with dignity," Duterte said.

The President also maintained that the Philippines is "not yet" and "can never" be ready in a possible nuclear with China.

He warned that a potential battle between the Philippines and China would only mean the "end of everything."

This was Duterte's first public comment on the issue since the incident was made known by the Department of Defense on June 12, 2019.

While his spokesperson and chief legal counsel, Salvador Panelo, issued a statement on June 13 saying the Palace was "outraged" by the incident, Duterte has chosen to keep mum.

Panelo earlier Monday toned down his comments and said it would be best to wait for the results of the investigations separately conducted by Manila and Beijing on the incident.

A Filipino fishing boat, F/B Gemver, sustained major damage and sank after it was hit by a Chinese vessel while anchored near Recto Bank, which is part of the maritime territory being claimed by both the Philippines and China, in the evening of June 9, 2019.

The boat's 22 Filipino crew were left in distress at sea after the sinking, but the Chinese crew allegedly fled the scene instead of rescuing them. The Filipinos were rescued by a Vietnamese fishing boat about an hour later.

China, for its part, denied allegations that it was a "hit-and-run" incident. In a statement issued in the evening of June 14, China said its vessel had accidentally struck the Filipino boat while it was trying to "evacuate" the area because it was allegedly "besieged by 7 or 8 Filipino boats".

The Chinese said it fled the scene because they were afraid of being besieged by the other Filipinos. They said, however, that they did not leave until the Filipinos were rescued.

The vessel involved is a light purse seine vessel from Guangdong, a much bigger vessel than the outrigger F/B Gemver.

The Department of Foreign Affairs (DFA) filed a diplomatic protest on June 12, 2019 as the incident drew mixed reactions from various sectors, with some calling for justice for the Filipino fishermen.

For now, Duterte said he opts to just follow international rules on preventing collision at sea.

"You know, we are ruled as a civilized nation and as members of the community by the law that govern whatever happened in the seas as we go along our business. There will be rules for a military confrontation. There will be rules for a mistaken identity attack. There is a rule for fishermen's boats. There is a rule for an aircraft carrier bumping a fishing boat," he said.

"Alam mo, with all the galit and one national official even urging sending the gray ships, warships doon sa China Sea, alam mo gusto ko iyan. Kung ako lang ang pipiliin niyo, gusto ko ng action, but I am not in my boyhood age anymore. I have a duty that is a burden, sometimes more than I can carry. I can almost cry," the President added.

(You know, with all the outrage and one national official even urging sending the gray ships, warships in the South China Sea, I want it. If I have to choose, I want to take action, but I am not in my boyhood age anymore. I have a duty that is a burden, sometimes more than I can carry. I can almost cry.) (Ruth Abbey Gita/SunStar Philippines)