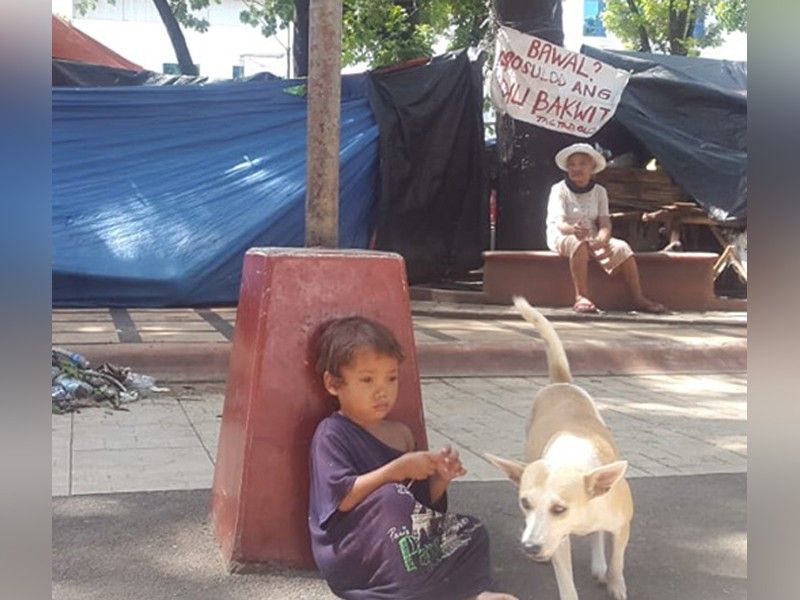 GIMME SHELTER. What awaits the evacuees at the Capitol Park in Cagayan de Oro can be gleaned from the faces of a young boy and an old woman seated from afar staring blankly outside their temporary camp, following a commotion on Monday, June 17 when Capitol officials resist the dwellers' initiative to build new house structures amid the rainy season's threat of danger to health. (Lynde Salgados)

SOME 30 families of evacuees at the Provincial Capitol Park have only until today, June 18 to dismantle their new-built house structures or face “demolition.”

This, after a capitol official and leaders of the evacuees from Lagonglong, Misamis Oriental figured in an altercation over the illegal construction of makeshift structures at the capitol grounds on Monday, June 17.

Lawyer Neil Pacana, provincial legal officer, confronted and berated the "bakwit" leaders Datu Reynaldo Ayuma and Junreboy Hilogon, after they failed to follow the agreement made two weeks ago.

Pacana said the provincial government only allowed the bakwits to repair their makeshift houses but not to construct new structures.

On Monday, June 17, the capitol gave the evacuees two hours to voluntarily remove the structures but to no avail.

But, Hilogon maintained that it is their initiative to build structures to replace their damaged shelters and as preparation also for the rainy season.

Hilogon said despite the objection from capitol officials, they would continue building the structures.

Hilogon said the bamboo, plywood and other materials were provided by a non-government organization called "Accord."

Pacana said the NGO could also be held accountable for failure to coordinate with the capitol officials.

The capitol's legal officer said the original offer was to relocate the evacuees in Lagonglong town and provide them with shelter, food and livelihood assistance.

However, the evacuees opposed because for them it will make no difference. They, however, wanted to return home as soon as the army soldiers leave their community in Sitio Camansi, Banglay, Lagonglong town.