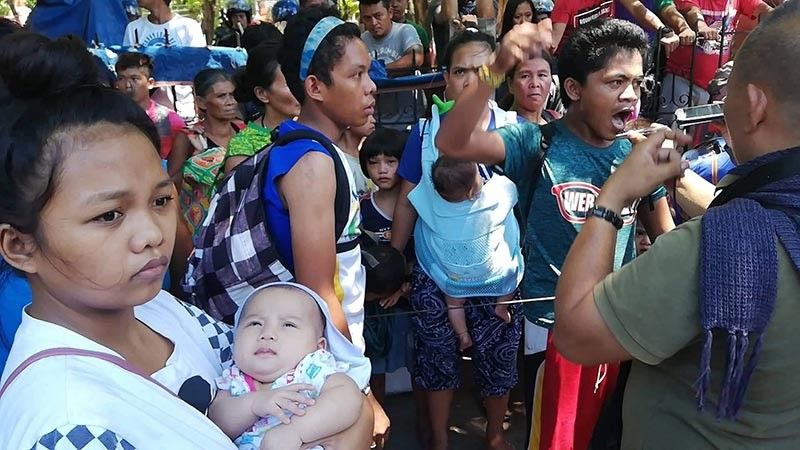 CAGAYAN DE ORO. A mother (left) refugee is carrying her baby (left), while another is being interviewed by a journalist (right) on Tuesday, June 18, 2019, as they oppose the move of the Provincial Government of Misamis Oriental to remove them in the vicinity of the capitol compounds. (Cyrill Garcia)

CAGAYAN DE ORO. Workers of the Provincial Government of Misamis Oriental gather the belongings of the evacuees of Sitio Camansi, Lagonglong, Misamis Oriental to a truck. The administration of the province initially plan to carry the residents back to their communities but the evacuees refuse. (Stephanie V. Berganio) 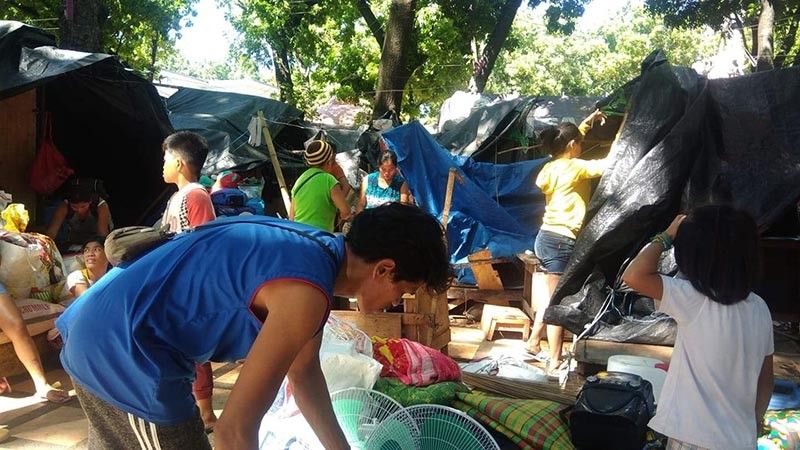 CAGAYAN DE ORO. Residents of Sitio Camansi, Lagonglong, Misamis Oriental who evacuate to the capitol compounds of the Provincial Government in Cagayan de Oro pack their things as they are told by the administrator to leave the vicinity. (Alwen Saliring)

EXCHANGE of arguments ensued Tuesday, June 18, when evacuees from Sitio Camansi, Lagonglong, Misamis Oriental, resisted the move of the Provincial Government to dismantle their makeshift tents and transport them back to their communities.

Around 160 individuals or 38 families originally evacuated last year due to fears of being subjected into a crossfire between the New People's Army (NPA) rebels and government troops.

On Tuesday, June 18, there are still 30 families left, but the provincial legal officer, lawyer Neil Pacana, decided that it is time to make them leave for not following an agreed term on building a "makeshift" house.

The estimated 133 individuals, including their children, have been resisting authorities when their belongings were taken by capitol personnel, as they were pressured to get in to the capitol's mini bus that will supposed to ferry them to a relocation site in Lagonglong town.

However, the evacuees did not board on the bus and opted to stay at the United Church of Christ in the Philippines in Barangay Macasandig.

But before they left the area, they threatened to come back and erect new structures at the park.

"Bisan pag ipapahawa mi diri, mobalik gihapon mi aron magtukod sa among mga balay-balay (even we are told to leave, we will still come back to construct new makeshift houses)," said Junrey Hilogon, one of the leaders of the evacuees.

Pacana said the dismantling of the makeshift shelters came after the evacuees built new structures at the park, which is a violation under a city ordinance.

Pacana said the Office of the Building Official (OBO) of Cagayan de Oro City authorized the dismantling of the structures and makeshift houses.

"The OBO gave authority to the barangay kung aha under ang (upon which the) capitol (is part, because) kay under the ordinance, the barangay is empowered to issue order for dismantling any nuisance structures erected in any public area," Pacana said.

Pacana also said the order was carried out with the help of the police which were directed to exert maximum tolerance and ensure that no one will get hurt, especially the children and elderly.

But the around five hours tension ended with two personnel from the provincial engineering office slightly wounded.

The leaders of the evacuees are also worried that the commotion will traumatize the children.

Hilogon said the Capitol failed to make good of its promise that they be accommodated in the duration of their encampment.

Meanwhile, the Movement Against Tyranny in Northern Mindanao Region (MAT-NMR) also expressed its dismay on the move of the Provincial Government to dismantle the evacuees' temporary shelters.

MAT-NMR spokesperson, Fr. Rolando Abejo, said the evacuees were only securing their safety when they built the structures as a preparation for the rainy season.

Abejo said government officials and law enforcers were accountable and should have respected the rights of the evacuees who were affected by the armed conflict in their community.