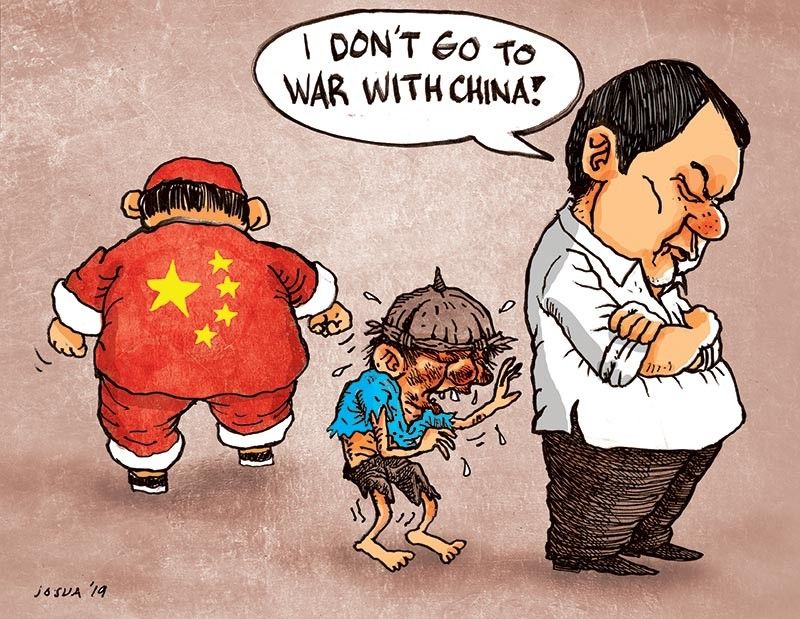 HERE it goes again. We hear the administration cornering yet another unfortunate event in the West Philippine Sea into the “we’re-not-ready-to-go-to-war” narrative.

And no less than President Rodrigo Duterte, emerging from a seeming stupor with his “calculated” response to the Recto Bank incident, chose the occasion of the 121st anniversary celebration of the Philippine Navy in Cavite City to warn about fanning intrigue on the incident “because that’s a fertile ground for [war].”

To recall, it was the Navy’s BRP Ramon Alcaraz, on routine patrol in Recto Bank, that assisted the recovery of the sunken F/B Gemver and her crew after a Vietnamese vessel fished them off the dark waters last June 9.

No less than Defense Sec. Delfin Lorenzana quickly steamed out, denouncing “the actions of the Chinese vessel for immediately leaving the scene of the incident, abandoning the 22 Filipino crewmen to the mercy of the elements.” Actions speak louder than words, and what it said insulted whatever notions of relationship we have with this supposedly friendly neighbor.

So the President had to come out with his statement before the Navy. If there’s any institution that the Recto Bank incident would hit close to home, you have it right there.

But we don’t buy the administration’s simplistic “not-ready-for-war” binary. Supreme Court Associate Justice Antonio Carpio, in a forum, said: “The option for the Philippines is not either to talk to China or go to war with China. This is a false option, and shows a dismal lack of understanding of international law and international relations.”

While government says it wants the facts first, it is also on one hand downplaying the incident by saying “banggaan lang yan” (That’s just a collission).” It is a clear effort to try to manage mighty hard the Recto Bank incident in the realm of public opinion. Downplaying the incident is also the government’s smack-sealed love letter to China. You can imagine the whole balancing act in the PR workroom, the storm before the final draft.

And then there’s Energy Secretary Alfonso Cusi whose vivid imagination had it that the ramming was unintentional.

To recall, early last year, Beijing agreed to a joint oil and gas exploration deal in the West Philippine Sea, covering of course the Recto Bank, reputedly rich in energy source deposits. That alone will make one understand the interest that drove Cusi’s creativity.

So the issue of Philippine sovereignty is the farthest from the mind of this administration. It is quelling a distraction while the framework for the joint exploration deal with China is in the works. F/B Gemver is twice a casualty. It is the government this time that has the brutish intention to ram the fishermen again into sinking.