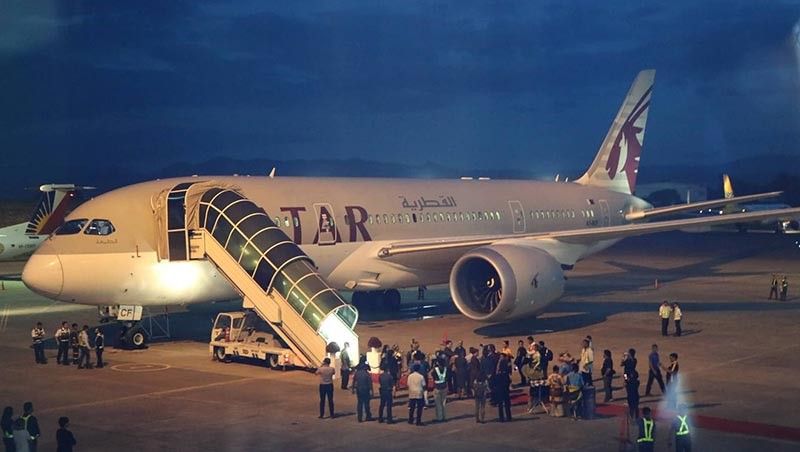 DAVAO. The Qatar Airways has launched its Doha-Davao route with the inaugural flight that carried 133 passengers landing at the Davao airport around 6 p.m. Tuesday, June 18, 2019. (Ace June Rell S. Perez)

The Ambassador of the Philippines to the State of Qatar Alan Timbayan was joined by Qatar Airways Senior Vice President Asia Pacific Marwan Koleilat on board Qatar Airways's inaugural flight to Davao City.

The multi-awarded airline will service the route once a week, every Friday using its Boeing 787 Dreamliner with 22 seats in Business Class and 232 seats in Economy Class.

Qatar Airways Group Chief Executive Akbar Al Baker said the airline is proud to extend its reach into the Philippines and the inclusion of Davao into their global network.

"This further demonstrates our commitment to the Far East region, a highly important market for Qatar Airways. With 50 weekly passenger flights to and from the Philippines, we take great pride in our role of enabling trade and connecting international businesses," he said.

Koleilat, for his part, said the flight to Davao City will have a stopover at the Clark International Airport in Clark, Pampanga, while the flight from Davao City to Doha will be a nine hours and 55 minutes direct flight.

"Conversely, this new non-stop once weekly Doha-Davao flight by Qatar Airways brings to fore Mindanao's viability as an investment and tourism destination," he said.

Department of Tourism-Davao Director Tanya Rabat-Tan told SunStar Davao that this new air link will have positive impact to the region's tourism arrivals.

"This will surely effect an increase of tourist arrivals. Definitely another opportunity to showcase the diversity of Davao to the European and Middle East markets, and of course our OFWs (overseas Filipino workers)," she said.

For the Davao-Doha flight on Tuesday, majority of the passengers were OFWs.

One of them is Yurie Gavasan, a mechanic who works in Qatar. He said the new route is very helpful to most OFWs for a hassle-free flight, adding a lot of his fellow OFWs are very excited for the route.

Gavasan's family is currently based in Davao City.

However, to maintain the route, Montenegro emphasized that efforts need to be exerted both by the government and private sector

"This is to ensure that this flight cruises through levels of sustainability," he said.