2 Liceo graduates hired as lab technicians in US 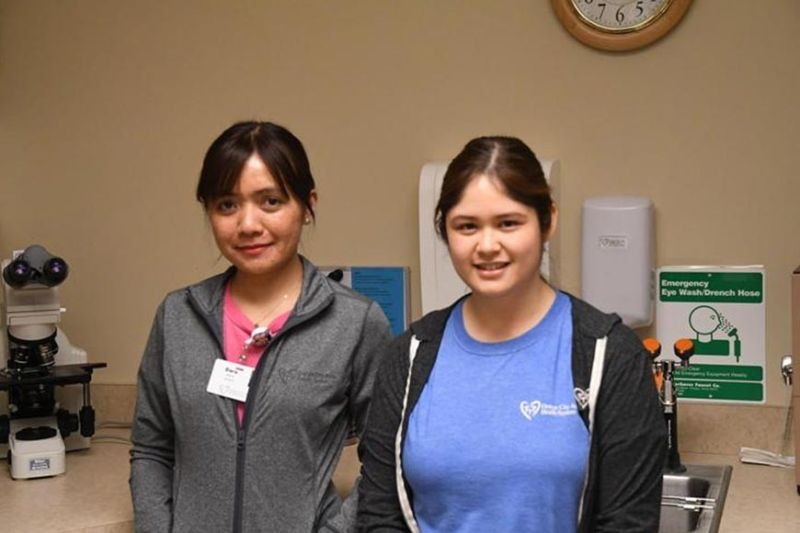 IOWA. Dara Daynos and Kathleen Gaabucayan work as lab technicians at the Orange City Area Health System. Originally from the Philippines, they were recruited after the hospital did not receive applicants for open positions in the lab. (Photo by Randy Paulson)

AT LEAST two graduates of Liceo de Cagayan University were hired to work as lab technicians in a hospital in Orange City, Northwest Iowa in the United States (US).

Previously employed at Madonna and Child Hospital in Cagayan de Oro City for five years, Kathleen Gaabucayan and Dara Daynos are now working as lab technicians at the Orange City Area Health System, a hospital that has been named as one of the Top Critical Access Hospitals in the nation.

It is also one of “50 Critical Access Hospitals to Know” in the US and a Women’s Choice Award recipient for Outstanding Patient Experience for three consecutive years.

Kathleen is the only daughter of former beauty queen Tina, the widow of former Ballpals president Ed Gaabucayan who died some years ago from prostate cancer.

According to a feature story published by The N’West Iowa REVIEW, the flagship paper of Iowa Information Publishers and Printers, Gaabucayan and Daynos were recruited after the hospital did not receive applicants for open positions in the lab.

In the article, Donna Morehead, the hospital lab manager, said with the help of the lab manager at Floyd Valley Healthcare in LeMars - which previously hired four lab scientists from the Philippines - they were able to make contact with the recruiter around April 2018.

Four months later, Gaabucayan, a Kagay-anon, came to Orange City from the Philippines, and Daynos, originally from Gingoog City, followed suit after the hospital, again, did not receive applicants when another position opened in the lab.

The two Filipinas’ work in the lab includes a range of duties and differs day to day, such as drawing blood from patients who needed to be tested for illnesses, and maintaining various machines in the lab.

Gaabucayan and Daynos’ work visas will last for three years, Morehead said according to N’West Iowa REVIEW’s feature article. It was also said that Morehead will be speaking to both of them if they will be interested to renew their visas for an additional three years.

The Filipinas were hoping to renew their visas and continue working in Orange City.