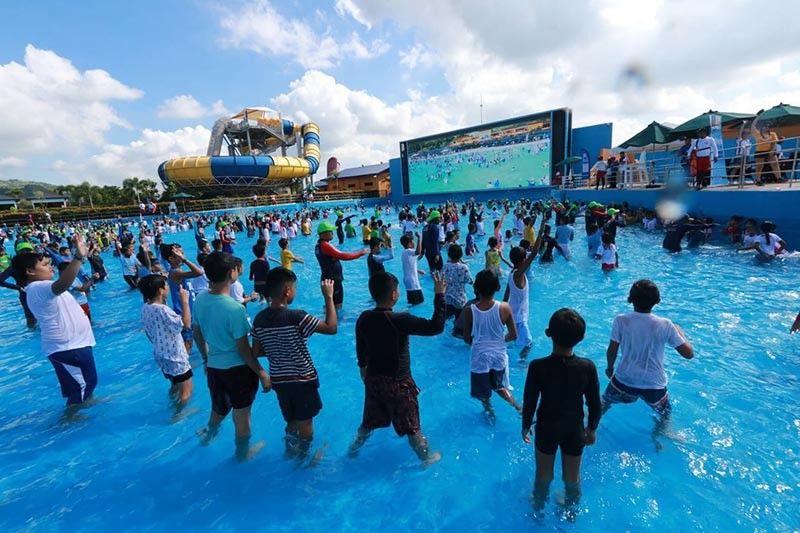 BBI Leisure and Resort Development Corporation president Irineo "Bong" Alvaro Jr. said the P2.5-billion water park, which hosted the World's Largest Swimming Lesson, is not only after the Guinness record but also the mission of teaching the children how to swim to save lives.

"It's not only about having been in the Guinness. It's not only about getting the price. It is about our mission to teach the entire community especially the children because learning how to swim can save not only your life but also you can save the lives of others," Alvaro said.

Alvaro, who is also the chairman of the Clark Investors and Locators Association (CILA), said Aeta children from various schools around Clark participated in the swimming lesson.

"We want them to be at peace with water. The danger kasi sa tubig ay yung nagpa-panic ka e. This mission that we are doing here, we are doing it yearly. In fact this is our second year and next year will be far bigger and I tell you sa mga nangyayari ngayon we want to improve more. Kita ninyo naman ang daming improvement ngayon sa Aqua Planet mayroon na tayong VIP lounge," the businessman said.

"So we want to show the world that in the Philippines, there is one very big and best water park located right here in Clark," Alvaro said. He lauded the persons with disability (PWDs) who participated in the event.

Alvaro thanked the Department of Education and local government units around Clark for supporting the event.

"We selected beneficiaries that are below the poverty line. Those who cannot afford to have swimming lessons and pay for entrance fees. So they will have a taste a different type of experience with free entrance fee, uniform, food, and others for the entire day," he added.

Alvaro said this is their way of giving back to the community.

"We don’t mind spending millions as long as we get into our mission and we become known worldwide through Guinness," he said.

Aqua Planet general manager Simon Jiang said that aside from the swimming lesson, they also conducted an earthquake drill to teach the kids how to behave in swimming pools when there is an earthquake.

"I believe that this is our chance to teach the kids about an earthquake and to do the appropriate procedure when an earthquake happens. So including in today's event are two things, safety lessons not only for water but also for earthquake," Jiang said.

Leilani Samson Cunanan, Schools Division Superintendent of Angeles City, thanked Alvaro and the Aqua Planet for giving the school children a chance to learn how to swim.

Aqua Planet is a joint venture of the BBI, Eaglesky Technology Amusement and Gaming, and Central Summit International.