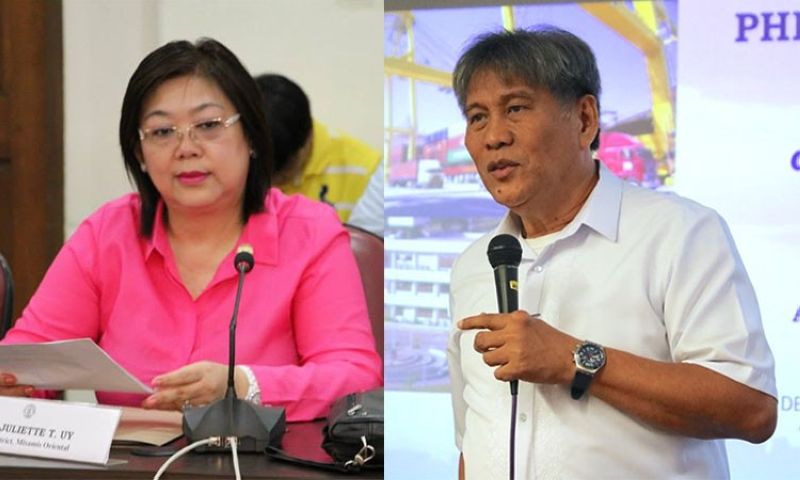 MISAMIS Oriental Representative Juliette Uy and Phividec Industrial Authority administrator Franklin Quijano both agree on the "diplomatic decision" of President Rodrigo Duterte on the incident involving 22 farmers whose fishing vessel was rammed by a Chinese ship.

Uy and Quijano are currently not in good terms, with Uy calling for the latter's resignation for allegedly allowing wastes from different countries to enter the ports of the provinces. Quijano, however, insisted that the lawmaker's accusations were baseless.

On Thursday, June 20, Uy said that all parties directly involved in the June 9 maritime incident are "ought to calm down and let our institutions do the proper work."

Quijano, for his part, believes it is just right for Duterte not to pick a fight with China over the sinking of the Filipino boat after it was hit by a Chinese vessel in the West Philippine Sea.

The incident, which was reported on June 12, has drawn outcry from somce ectors, especially from political opposition and progressive groups. The groups called on the government to make a stand and call out China's bullying in the West Philippine Sea.

"The Philippine Coast Guard (PCG) has started its work on the case. I believe all the national authorities must respect the jurisdiction of the PCG on this, so they should all step back to let PCG do its work well," Uy said.

She said the PCG "should give the public and news media a timeline, the parameters of their investigation, the process they will follow, and the investigation techniques they will use."

"At this stage, it may be more appropriate to use the term incident instead of the word accident. PCG keeping everyone informed on a regular basis will help quell speculations and ease tensions," she added.

Uy advised the mayor and the council of San Jose to formally thank the Vietnamese ship, its captain, and its owner.

"That can be done through a council resolution signed also by the mayor. If the ship captain and ship owner can visit San Jose, the resolution can be presented to them," Uy said.

Meanwhile, Quijano, believes that although it is wrong to describe what happened as "just a little maritime incident," Duterte is rightfully diplomatic in dealing with the issue.

"You really have to do diplomacy... and statesmanship," he said in an interview after a media briefing Tuesday, June 18, at the Phividec Conference Room in Cagayan de Oro City.

He issued the statement after announcing to the media that next week, he will meet with a Chinese investor to finalize a plan to put up an integrated steel mill that will occupy a 305-hectare vacant lot inside the Phividec compound, which has a land area of 3,000 hectares, covering 13 barangays of Tagoloan and Villanueva towns. (Nef Luczon/With reports from PNA)