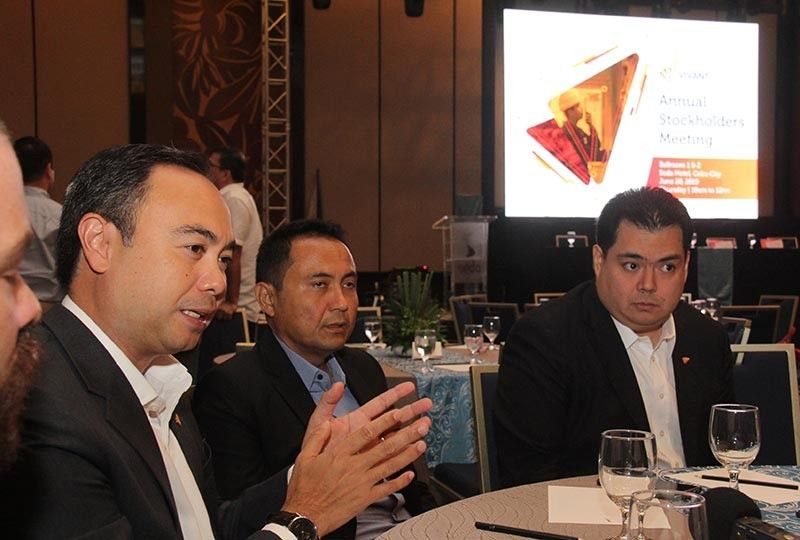 GROWING IN OTHER FRONTS: From left, Vivant executive vice president Arlo Sarmiento says the company is going beyond the power business as it diversifies into water and tollway projects. With him are Jess Garcia, the firm’s corporate secretary, and Emil Andre Garcia, executive vice president and chief operating officer of Vivant Energy. (SunStar photo / Amper Campaña)

“With the JV we will have technology and know-how that is at par with the world. It will also open many doors of opportunities in the water business application in industries, agriculture, wastewater treatment and bulk water supply,” said Sarmiento during the company’s Annual Stockholders’ Meeting on Thursday, June 20, 2019.

Vivant eyes to set up the company this year.

“Our goal is to diversify our portfolio and limit the concentration risks we currently have under power. We have already made good headway in jumpstarting our infrastructure business,” said Sarmiento.

Vivant’s corporate secretary Jess Garcia said they are studying the traffic situation and behavior in Metro Cebu to determine the kind of project they will propose under the public-private partnership scheme.

“We are looking forward to seeing the potential value these new businesses will bring amid the government’s Build, Build, Build program and the urgent need of infrastructure in Cebu,” Sarmiento said.

Vivant, whose core business is in power generation is allotting P11 billion in investments in the next five years.

Vivant Energy, the power arm of Vivant was officially launched during the ASM.

“Activating Vivant Energy will allow us to focus on where we are the strongest, power,” said Emil Andre.

“The Vivant Energy team will explore the many opportunities coming up in an ever-changing field in even greater depth.” Vivant Energy sees opportunities in the increasing demand for power and energy solutions as the country’s economy continues to grow. The company said it sees growth areas, not just in conventional power generation, but also in renewables, both on-grid and off-grid, amid a strong policy framework that supports renewable energy.

Sarmiento said Vivant ended 2018 with its “highest income so far since its incorporation.”

Despite 2018 being a challenging year, the group declared an income of P1.7 billion, resulting in return-on-equity of 15 percent.

The company’s assets grew nine percent in 2018 mainly as a result of additional investments in JVs for its projects.

“It was a good year, but along with this success comes the need to come up with long-term strategies to keep the ball rolling. Our outlook for the business remains positive, and we intend to play an active role in the many opportunities presented to Vivant,” said Sarmiento. (KOC)