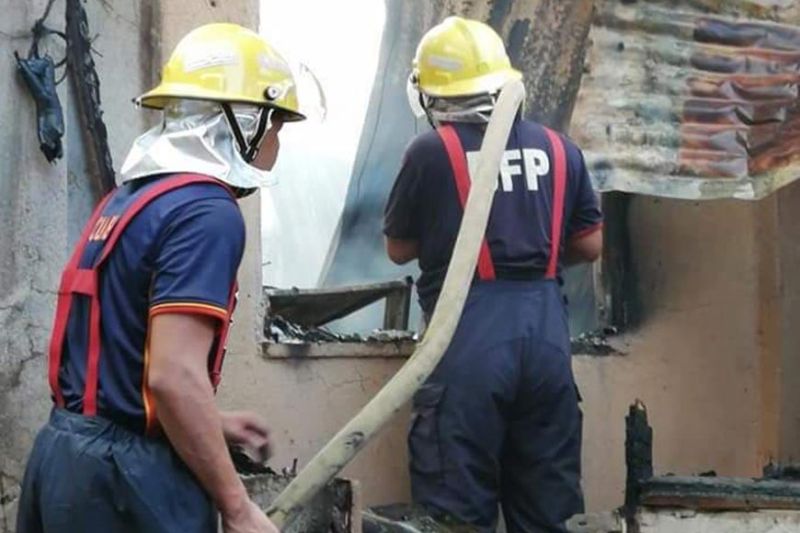 CONNECTING HOSES. Firefighters had to connect their hoses in Sitio Ibabao, Barangay Pusok in Lapu-Lapu City to reach houses in danger of being destroyed in a dawn blaze Thursday, June 20, 2019. Firefighters faced the challenge to reach them because of the absence of access roads. A total of 80 houses were damaged. (Contributed photo / Andy Berame)

AN OVERHEATED appliance or a grounded electrical wire could have caused the fire that hit 80 houses in Sitio Ibabao, Barangay Pusok in Lapu-Lapu City past 5 a.m. Thursday, June 20, 2019.

The Lapu-Lapu City Fire District received the first alarm at 5:41 a.m. Fire was declared controlled by 6:26 a.m. Fire Supt. Crispulo Eusebio Jr., city fire marshal, said the fire started in the house of a certain Gina Rosales. No one was in the house when the fire broke.

The number of houses affected reached 80 because they were made mostly of light material and there was little space between houses or no access road for the firefighters to move. He said they had to connect their fire hoses to reach the houses.

No casualties were reported. Damage to property was worth an estimated P450,000.

“The most important thing is we prioritize the people, evacuate them,” Eusebio said.

An initial fire investigation showed the blaze could have been caused by an appliance that was left on as there was no one in Rosales’s house. Other residents said it could have been a grounded electrical wire at the roof.

Eusebio didn’t think it was arson or intentionally started. It could have been recklessness on the part of a homeowner, he added.

Affected families were placed in the Mini Hoops Dome in Barangay Pusok for temporary shelter. (From GCM of SuperBalita Cebu)