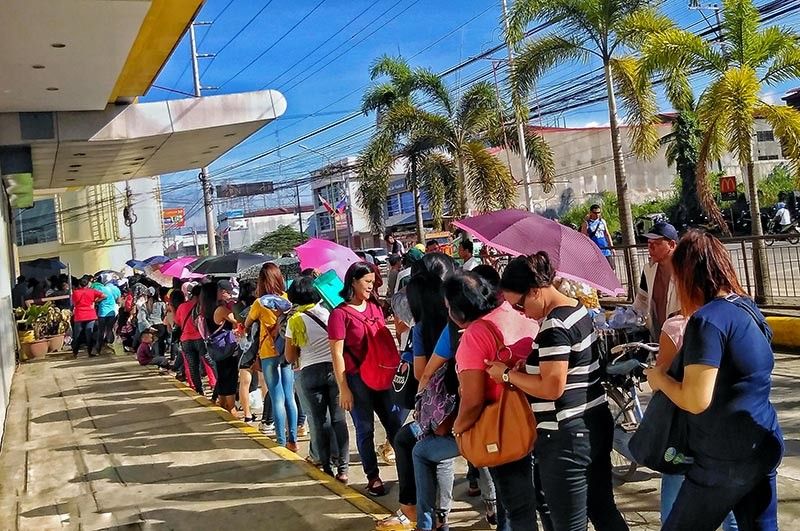 LONG LINES. Despite the heat or spending long hours queuing, people drop by the different offices of investment schemes just to receive their "pay-outs."

WHEN their friends and other neighbors started talking about investing in Rigen Marketing, alias Rosa and her husband also tried investing in the same. They do this while holding on to the promise that a 400 percent increase from their initial investment will be given to them after a month or so.

Rosa is a 27-year-old housewife from Bangkal, Davao City married to a former Overseas Filipino Worker (OFW). They have two kids who started school this June. In time for the opening of classes, Rosa said they found Rigen Marketing a financial opportunity to assist them with the kids’ school needs.

“Una namo ni nakita sa social media. Naay mga naga-post. Among mga silingan pud ug mga kaila nangapil na sila ug naa man pud sila nadawat na pay-out so amo lang sad gisulayan sa akong bana. Akong bana gyud to nagsugod kay naa siya’y amigo na nag-invite sa amua. (We first heard it through social media. We’ve read posts. Our neighbors and friends have also invested and they have attested that they did receive the promised pay-outs so my husband and I tried to invest also. It was really my husband who tried it first because he had a friend who invited us),” shared Rosa.

That was in May. The P5,000 they first invested returned to them as P20,000 cash. In a normal set-up, the recruiter is supposed to receive 10 percent commission but Rosa said her husband’s friend did not ask to be paid and added they are friends anyway. She said she plans to further invest the P10,000 from her payout to grow her money to P40,000 by June while the remaining P10,000 she will use for her children’s school needs.

It was in Tagum City, Davao del Norte where Rigen Marketing and other recent similar investment schemes were first established. From there, a lot of others had been founded in other parts of Mindanao and have since branched off to different areas.

If Rigen Marketing promises 400 percent increase within a month, Ever Arm Marketing has a promise of 500 percent returns. Kapa Community Ministry International, Inc. (Kapa) gives 30 percent return in a month for the ‘donations’ being given by the ‘donors.’ As they are a ministry, they choose to call the money remitted to them as ‘donations’ and not as ‘investments’. Titans Marketing doubles the investors’ money after a week.

Crypto currency is a digital currency used by individuals to ‘trade’ securing financial transactions and asset transfers. And while no investment scheme had directly confirmed involvement in crypto currency, many investors believe this to be the case and even defend the schemes. Not all the investment schemes have been linked to crypto currency. Organico Agribusiness Ventures, in particular, encourages the public to buy a piglet worth P3,600 and after 90 days the money will grow to P6,000.

Because of the easy registration and fast-money set-up of these schemes, more and more grew attracted to invest. It grew like wild fire with the daily news and updates from media outlets fanning the blaze. The schemes are not anymore concentrated on a certain demographic. People from all walks of life, whether unemployed or employed, rich or poor, have invested. Allegedly, there were government office clerks, policemen, lawyers, farmers, students, entrepreneurs, and call center agents to name a few who had invested in one or more of these schemes. It came to a point that any random person you ask knows someone who have invested, if not him himself.

These schemes had already been operating for several years but had only gained attention late last year. A month after the release of the cease and desist order (CDO) for Kapa on February 14, the Securites and Exchange Commission (SEC) made permanent the order prohibiting Kapa from soliciting investments after they failed to file a motion to lift CDO within the given period. The schemes have business permits different from the investment nature of how they actually operate, as stated by SEC.

“When it is too good to be true, it is fraud. Biro mo ‘yung P100,000 mo would earn P30,000 a month? Ni bangko na ‘yung Bangko Sentral ng Pilipinas natin magbigay tres lang porsyento. Annually ha...It is a continuing crime. So arrest them and investigate it,” said President Rodrigo Duterte on Pastor Apollo C. Quiboloy’s TV program Give Us This Day aired on June 8, 2019.

This statement of the president shook the entire nation causing hatred from the investors to the president and Pastor Quiboloy for being “anti-poor”.

Following the President's statement, the government has mobilized its different personnel from different agencies like SEC, Department of Interior and Local Government (DILG), Philippine National Police (PNP), Criminal Investigation and Detection Group (CIDG), and the National Bureau of Investigation (NBI) to investigate and shut down different investment schemes nationwide.

Is it affecting the economy?

The investment fever went up to the extremes of investors allotting most, if not all of their resources. Others even pawned their own land titles or houses to loan huge amounts for investing.

Early 2019, the General Santos City Chamber of Commerce and Industry, Inc. (GSCCII) expressed concern after a number of workers in the city and neighboring towns have left their jobs to focus in their investments.

“Lending companies have also noted a drastic decline in transactions. The fishing industry is now suffering from the decline in the number of fishermen. Several canneries of the tuna processing plants, private schools, and other businesses noted that they have lost some of their personnel already to such investment groups,” GSCCII said in a statement.

“When businesses and industries shut down, there shall be no more employment and the economy plummets to an abyss. Such economic condition will undoubtedly drive away legitimate businesses and investors to an exodus outside of General Santos and the region,” the statement added.

Rolivel Elusfa, a farmer from Kidapawan City who has degrees in both Sociology and Economics, said that if schemes further operate, this could pose great damage to the country’s economy. In their town, he knows a lot of farmers who invest from P5,000 up to their own farm land titles. He added that as a farmer he understands the sentiments of his friends knowing that farming is not a stable form of income with very low cost of crops these days. Ironically, this is despite the Philippines being an agricultural country.

“Kung magpadayon ni sila, hugno ang atong ekonomiya. For one, atong banking system mahugno. Ang mga tao na didto sila [sa schemes]] kay tibuok ang interes. Walay legitimate business na nakita nato [human sa pay-out]. Gahisgot sila’g lobster business pero wala man ta makita na business. (If these continue, the economy may collapes. For one, our banking systemn will collapse. Those who are into investment schemes have no legitimate business. They are saying that they have a lobster business but we cannot see what that business is). It’s actually draining our economy. This is bordering economic sabotage,” said Elusfa.

He added if the farmers continue to rely on investment schemes, which pays them more than farming does, it will compromise the country’s food production.

“Unless issues on farm land ownership and other agricultural concerns are addressed, schemes like Kapa will still be revived in a new form in the future kay there are always people who would exploit the poor and the situation. So vulnerable kaayo atong mga pobre (The poor are vulnerable),” Elusfa said.

“There’s this principal rule in investing that says never invest in anything that you don’t understand. At a glance, it seems easily understandable. They’re promising double your money, or triple your money, or get this percentage back for just an initial investment. So it seems that at a glance, you understand this investment scheme but do we truly understand the whole nature of how it works. Where do the funds come from? Where does the business come from? Why are the returns so quick? Is it even legal?,” said financial adviser Emjay Llerena from Davao City. She added that situations like these highlight the apparent need for financial education for every Filipino.

Llerena said one important key rule in investing is to invest only the amount that one can afford to lose and to have a better long-term plan once the interest money had been received.

“Protect the gains of your investment because it’s not really how much you make but how much you keep afterwards. It’s a wasted opportunity if they don’t protect it in the long run,” she added.

Business Development Officer of First Metro Securities Davao Investor’s Center Roberto Marco Samson said they conduct free seminars in partnership with the Department of Trade and Industry (DTI) to educate people of alternative and safe investments such as stock markets. He said contrary to what most people believe, stock market is not only for the rich and Filipinos should not be intimidated by this. As a matter of fact, Samson said, people can invest in stock market for even as low as P5,000.

“Keep an open mind when it comes to learning. One thing that we emphasize to all our attendees is to invest in yourself by way of gathering knowledge, reading books, reading articles, or approaching organizations like DTI, PSE (Philippine Stock Exchange). You ask questions para you know more kung ano ba talaga ang investment option na pwede sa ‘yo. Invest in yourself before deciding to part with your money,” suggested Samson.

People have varying opinion over President Duterte’s decision to close down investment schemes mushrooming in different parts of the country. There were some who were hysterical and pleaded for him to reverse his decision. But perhaps after the cloud of emotions and disappointment had dissipated, people will understand that if this pushes through, it could be even more detrimental to the country’s economy and more and more Filipinos will suffer, investors or not.