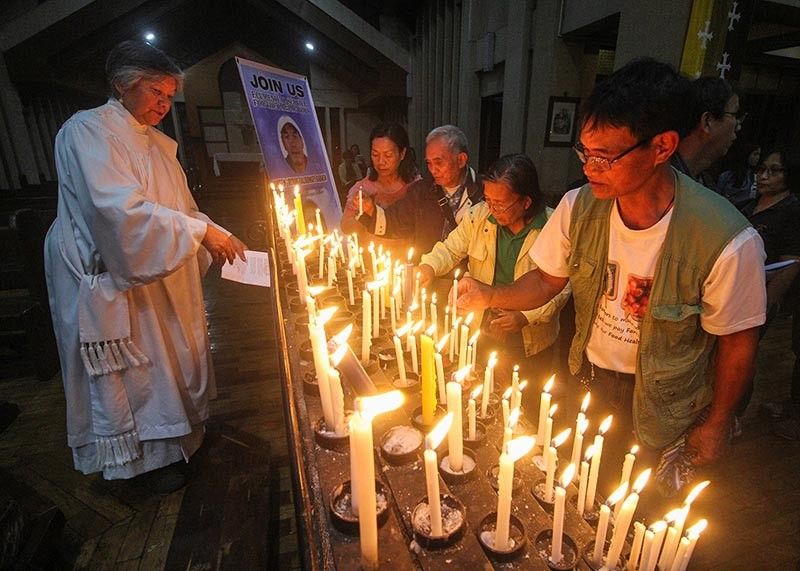 BAGUIO. Besao residents light a candle as a symbol of hope in bringing justice to the murdered villagers of Besao, Mountain Province during the ecumenical service at the Cathedral of the Resurrection in Baguio City. (Jean Nicole Cortes)

RELATIVES and friends, including residents of Besao in Mountain Province are crying for immediate justice to three villagers who were found dead with gunshot and hack wounds last May.

Besao Mayor Johnson Bantog II, during a prayer rally in Baguio City, denounced the killing of the three Besao villagers identified as Jansen Gabaen, Ronnie Macayba and Pedro Sauyen who went hunting and fishing for eels in the forested area in the borders of Besao and Tubo in Abra on May 24.

The area is locally referred to as "Pagpag area."

After a week, the three were found lifeless, with gunshot and hack wounds in their bodies. A sack of eels was also found on the site.

"The people of Agawa, Lagat and the whole of Besao are working day and night in their desire to seek for a peaceful and early solution of the crime. They would not stop until justice is served," Bantog said.

"I tremble in fear every time I imagine the situation of us gailing in our quest and that what happened to our boys may be get lost in oblivion," he added.

On June 22, a manifesto was signed by concerned citizens of Besao, citing Tubo Municipal Police Station in Abra to conduct an intensive and credible investigation on how the murders happened and to arrest the real culprits.

The manifesto also called the leadership of the Philippine National Police (PNP), specifically the director of the Police Regional Office Cordillera, and the Criminal Investigation Detection Group (CIDG) to look into the murders.

Baguio City Mayor Mauricio Domogan, meanwhile, asked the cooperation of all stakeholders in solving the case, including the PNP, CIDG, and National Bureau of Investigation.

"It is an opportunity for them to show ti entero a pigsa ken laing da nga mangsolbar ditoy," the mayor said.

A "Caravan for Justice" was held on June 19.

On June 20, three counts of murder were filed by police in Abra against at-large suspect Marlon Bacali Batuli, 39, a resident of Barangay Tabacda, Tubo in Abra before the Provincial Prosecutor's Office in Bangued, Abra.