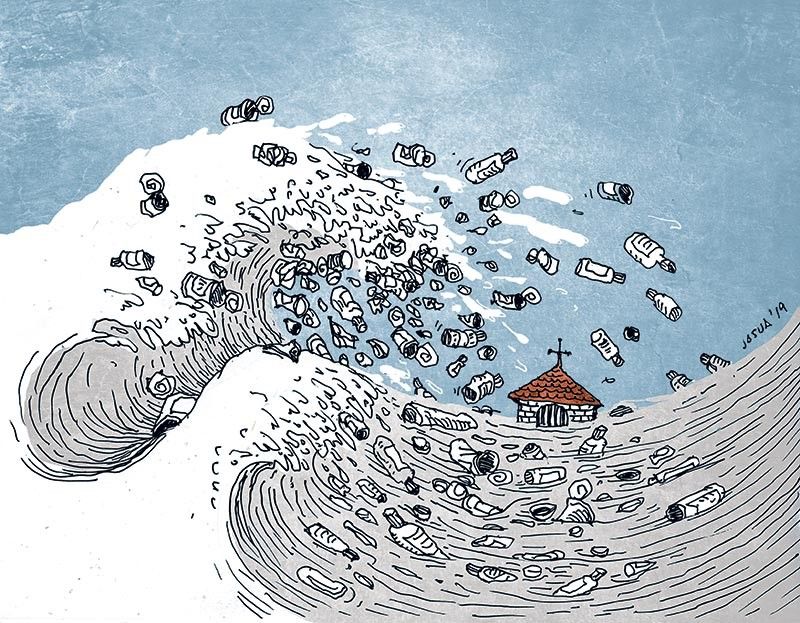 THERE is an overflow of river myths in all cultures around the world. They are regarded as medium of the gods, passage to the afterlife, to name a few. In the ancient tales of many cultures, rivers are revered, regarded with human traits even when, in life, it is actually the river that teaches humans the better ways to live.

A brief downpour last Sunday roused Mahiga Creek with just what the citizens need to know about the state of their sanity and sanitation. In one surge, we see the massive dump of plastic waste choking the neck under Subangdaku Bridge in Mandaue City. It exudes the feel of Hokusai’s Great Wave, only that it was trash that clawed furiously into the shameless metro.

Mahiga Creek is a convergent waterway hosting the two cities of Mandaue and Cebu. It’s like a borderline crevice, a heartbreak by some stretch of metaphor.

Cebu City Environment and Natural Resources Office Chief Nida Cabrera said government had done its part, implementing a series of rehabilitation programs on Mahiga Creek, but citizens can’t just keep the discipline to help in their own ways.

Oh well, last Sunday, the river seized its day to remind citizens their oblivious ways. Sunday’s image of the rubbish-swirling Mahiga Creek was its chance shoutout to the public.

We suppose you, dear reader, can’t just simply dump the whole task of cleaning up the city to government. Your backyard is very much THE city under your watch. Your garbage IS that part of the city that you need to properly dispose of. There is a good list of legal grounds to apprehend improper disposal of waste, but they are a whole different ballgame in practical terms.

While at that, it is high time governments in metropolitan Cebu got their acts together with utmost urgency to create a unified body that will once and for all push for the realization of any comprehensive plan to address flooding in the cities.

In Greek mythology, the River Styx forms a border between the underworld and the world of the living. The gods swear oaths upon the river, and if they fail to deliver on their promises, they are made to drink from the foul river and lose their voice for nine years.

The Mahiga Creek should inspire a public pact to which everyone must take their oath—for the public to throw their garbage properly, and for governments to push sustainable solutions to the problem. If they fail, well, there is a tweaked quote that says “Hell hath no fury like a river scorned.” The Sunday overflow was a taster.

You want a bid into the United Nations Educational, Scientific and Cultural Organization’s Creative Cities category? Start with a design solution to flooding.