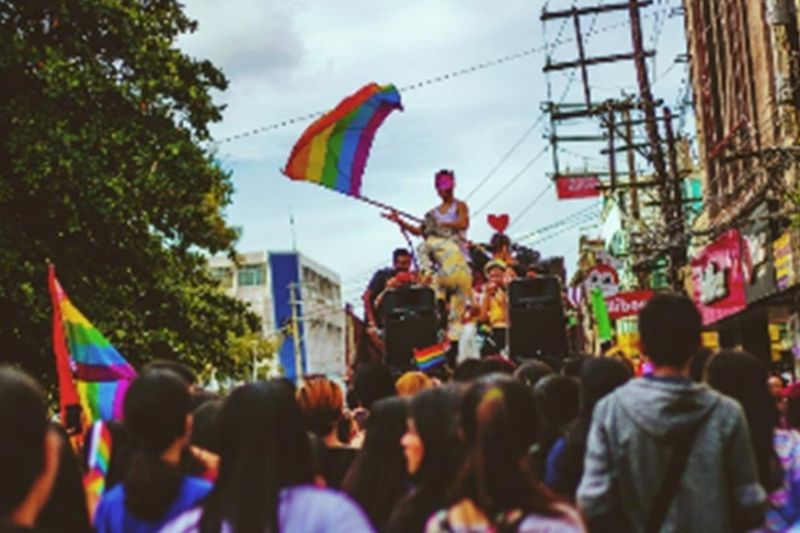 BACOLOD. A man waving around the town plaza a rainbow flag which is the LGBTQ symbol. (Nichol Francis Anduyan)

THERE is an ongoing debate whether or not to approve gay unions in the Philippines. I had one such debate.

One benefit of the digital age is the instant sharing of information on the web, be it on Facebook, Twitter, or any other platforms. As I was reading my usual feed, one article caught my eye-an opinion with a stark opposition to same-sex marriage. It was well-written. Why the debate then?

Being one of the only two predominantly Catholic countries in Asia (the other being East Timor), the Philippines by majority does not favor same-sex marriage. The idea of two men or women being wed by a holy priest at a sacred place is sacrilegious to the faithful majority. After all, the sacramental benefits of holy matrimony are strictly exclusive to the union of a man and a woman.

It turns out what is probably getting traction is the push for gay civil unions, not marriage. I’ll spare you from the wordplays but the point is this type of union is purely secular and devoid of any religious rituals found in church weddings. In other words, this is a formal recognition by and from the state of homosexual partnerships, which let’s face it have been here for so long and are not going anywhere. It is, the way most people put it, the accordance of equal rights to same-sex couples which is already long overdue. Think of it as a purely state-recognized union but one that is for both men or both women.

The fact this union does not curtail the right to freely exercise religion shows us it has more potential to be unifying than separating. Most of the arguments thrown against it are just a hodgepodge of sorts- logical fallacies such as appeals to tradition, attempts to misdirect us and miss the point, or plain rhetoric. For one, legalists seem to be blind to the fact that the Constitution is silent as a lamb on the prohibition of same-sex marriage, let alone same-sex civil union, but the Constitution does scream aloud the principles of justice, love and equality. Civil unions, when recognized by the state as a common contract for all just as any other contract, is a binding not disintegrating force.

Perhaps this year’s Metro Manila Pride couldn’t be more commemorative of the event that marked the Pride we knew today- the Stonewall Riot of 1969. A resistance to police raids on gays, Stonewall was a significant driver in forwarding the LGBTQ+ rights movement. Its strong message of resistance, which I qualify to be intersectional with other social issues, has changed much of the world since then. I consider the Philippines a conservative country because of its unique demographics as I have stated before. However, just like other countries who took a stride for Pride, the Philippines was no exception. Did you know this country held the first-ever Pride-related event in Asia? It is reported in 1994, to commemorate Stonewall and resist the imposition of Value Added Tax, the event known as “Stonewall Manila” or “Pride Revolution” happened in Quezon City. Though organized by ProGay Philippines, there were members of the Metropolitan Community Church who took an active part in the organizing. To put it simply, the first Pride event in Asia happened in the Philippines, showed the intersectionality of Pride with social issues, and united the still-existing warring factions of the religious and the LGBTQ+.

I expect this year’s Metro Manila Pride wouldn’t be essentially different. As with the previous Prides, expect there would be calls to resist the administration’s “march” with China that is encroaching upon our territorial waters. It would be a wonderful and colorful avenue for resistance after a Chinese vessel rammed one of our fishing boats. The potential of this event to collectively foster change is crazy as Metro Manila Pride held the largest Pride demonstration in Southeast Asia last year (estimated to be at 25,000). In addition, there were also local demonstrations in remote cities such as Cebu and Iloilo. I am happy that this year in Bacolod, rainbow flags waved in the air around the town plaza once again.

Whenever I have an argument about any issue, whether in online or personal, I try to see what other perspectives I could look at it from- to listen, not just hear. When we try to see with different perspectives, we may realize that the things we thought were separating may actually be unifying. Let me get straight to the point: there would be no funeral march for our longstanding traditional marriage, no religious rights would be trampled on, father would bless only Adam and Eve, only a state recognition for Adam and Steve or Eve and the pretty girl she chose over Adam. See that perspective now?

The author of this article would like to thank Mr. Churchill Aguilar, Editor-in-chief of Sunstar Bacolod, for putting up a space for the author’s thoughts. Currently an undergraduate student at UP Diliman, the author is originally from Bacolod City and has lived there for 16 years.