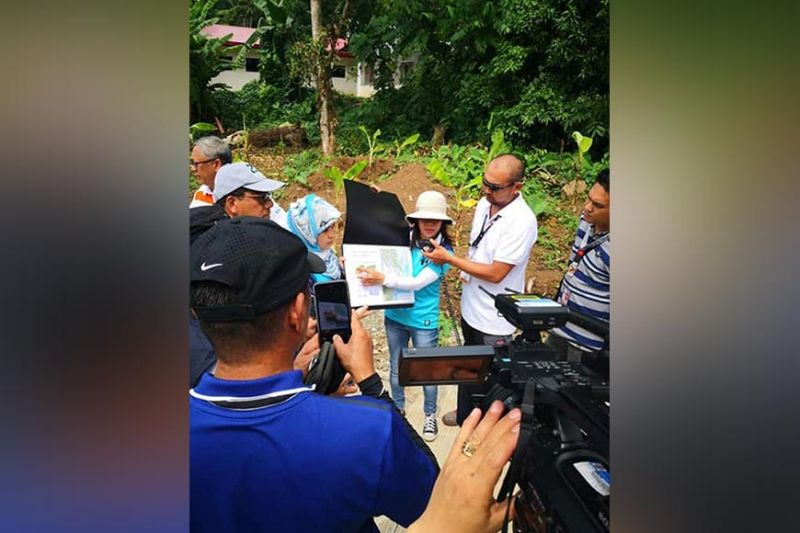 RESIDENTS living atop the fault line in Bago Oshiro and Mintal were informed on the looming disaster that may happen in the area considering that the two barangays sit on an active fault line that may trigger a 6.8 magnitude earthquake with an 8 ground shaking intensity.

In a bid to raise awareness on the fault line, various government agencies conducted a walk the fault activity on Monday, June 24, to determine the exact location of the fault and inform the public, especially those who are living atop the fault line, of their vulnerability when these faults move.

The activity was conducted by the Office of Civil Defense (OCD 11), together with the Department of Science and Technology-Philippine Institue of Volcanology and Seismology (DOST-Phivolcs), Davao City Disaster Risk Reduction Management Office (CDRRMC) and a representative from the Association of Regional Executives of National Agencies (Arena 11).

They walked along with some parts of the Lacson and Dacudao Fault line in Barangay Bago Oshiro and Mintal to promote awareness and safety among residents should these fault lines move when a disaster like earthquake occurs.

“The Walk the Fault activity is part of the activities that the Office of Civil Defense and the Davao City Disaster and Risk Reduction Management Office (CDRRMO) requested for Phivolcs to do so that those barangays and residents that are transected by the Central Davao Fault System would not only be aware of the hazards that these earthquakes produce, but most importantly to find out where the exact trace of the fault is so that we are aware of the threat to their house,” Phivolcs Director and DOST Undersecretary Renato Solidum Jr. said in an interview.

Solidum added that this information may be used by barangay officials in their planning for disaster response so that people will be aware if they are dwelling above the fault line. It will also serve as a way to let the residents know how these fault lines are behaving.

For his part, Mintal Barangay Captain Rey Amador Bargamento said they are continuously investing in the training of their barangay volunteers and equipment in anticipation for disasters to ensure the safety of their 15,000 constituents.

Likewise, OCD 11 information Officer Leslie Francisco said that with this activity, it will help concerned citizens to be disaster resilient.

“This activity is of extreme importance because this will allow us to identify and notify in advance those who are living in or occupying the buildings that are sitting on top of the fault lines. In this way, we can mitigate the devastating impacts in case the Lacson Fault Line or Dacudao Fault Line moves,” Fransciso said.