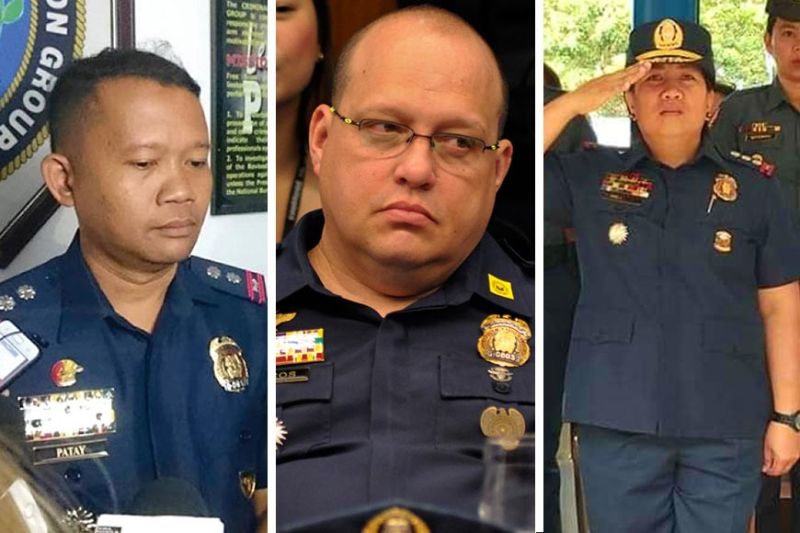 CHIEFS IN WAITING.Criminal Investigation and Detection Group (CIDG) Central Visayas chief Lito Patay (left), CIDG Eastern Visayas chief Marvin Marcos (center) and Siquijor Provincial Director Angela Rejano (right) are candidates for the post to be vacated by Cebu City Police Office Director Royina Garma. Patay and Marcos have been linked to the killings of drug suspects, a large number of them in the case of Patay; and a prominent one, in the case of Marcos. (SunStar file (Patay), Contributed photo(Marcos), Siquijor Pio (Rejano)

TWO of the three police officers being considered by Camp Crame to be the next Cebu City police chief have links to extra-judicial killings.

Going by the standards of a police chief set by incoming Cebu City Mayor Edgardo Labella, they do not qualify.

Cebu City will have a new mayor and a new police chief starting July 1.

Labella will be at the helm of the City Government for the next three years.

She will move on to head the Philippine Charity Sweepstakes Office (PCSO) upon the appointment of President Rodrigo Duterte, she said at a press conference Monday, June 24.

A source in the police organization privy to the assignment changes named Camp Crame’s choices for Cebu City police chief to be:

2. Col. Marvin Marcos, head of CIDG in Eastern Visayas or Region 8; and

Patay and Rejano were Garma’s classmates in the Philippine National Police Academy Class of 1998.

Police Regional Office (PRO) 7 Chief Brig. Gen. Debold Sinas said that if it were up to him, he’d prefer another woman to head the Cebu City Police Office (CCPO).

“We already saw what a female official like Garma can do. Women have this image that is incorruptible. Just look at CCPO now. Even the comfort rooms are clean,” Sinas said in his regular press conference on Monday, June 24.

Labella is not picky with the gender. He only wants a police chief who is “not involved in summary killings.” In a phone interview with SunStar Cebu on June 24, Labella described his choice as one possessing dignity, dedication to service and commitment to fight criminality.

He said he prefers a police chief who has a strong stand against illegal drugs and who can keep corruption out of the Cebu City police force.

Labella has yet to name his choice.

Under the Local Government Code, the mayor can recommend three contenders of his choice to be police chief. But it’s still Camp Crame that has the final say on who gets what assignment.

Patay headed “the deadliest police station” in Quezon City from July 2016 to July 2017, when at least 108 persons were killed in its jurisdiction. The anti-drug operative unit’s core reportedly came from or near Davao.

He is from Enrique Villanueva town in Siquijor.

After graduating from the PNPA in 1997, he was assigned to the Provincial Mobile Group of Davao del Norte Provincial Police Office.

Patay served as chief of several police units in Davao del Norte before being moved to Quezon City in 2016.

When he assumed the top post in CIDG 7 in August 2018, Patay told reporters that their job is not to kill criminals but to arrest and investigate.

Marcos was among those implicated in the killing of drug lord Rolando Espinosa Sr., town mayor of Albuera, Leyte and Duterte-labeled drug lord, inside his cell at the Provincial Jail in Baybay City, Leyte on Nov. 5, 2016.

Espinosa’s son, self-confessed drug lord Kerwin Espinosa, had accused Marcos of asking for P3 million from his father to fund his wife’s political campaign, in exchange for police protection.

Marcos was reinstated in July 2017. He was assigned to head CIDG in Soccsksargen. He is back in Eastern Visayas as CIDG 8 chief.