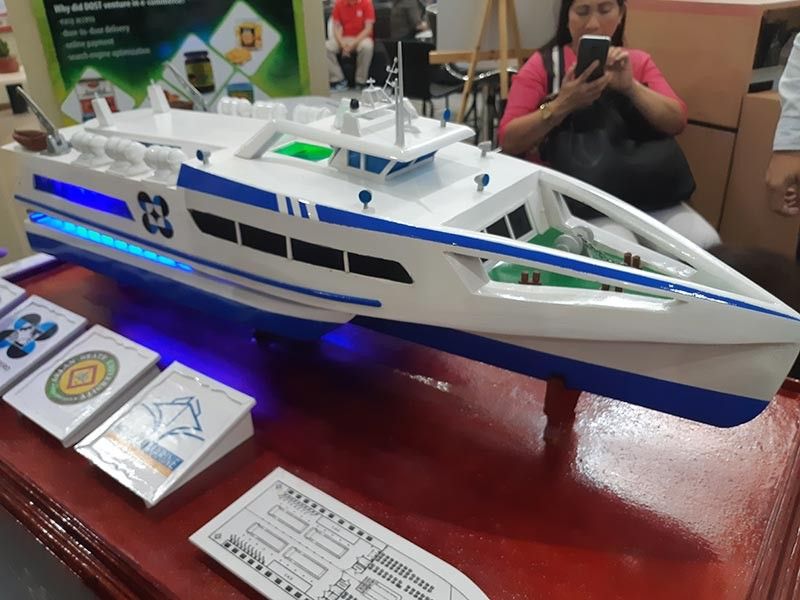 AKLAN. A woman is taking a photo of a replica of a proposed trimaran vessel that uses ocean wave energy. Once completed, it will be the Philippines' first. (Jun N. Aguirre)

NEW WASHINGTON, Aklan -- The Metallica Shipyard will start crafting by July the first Philippine ocean wave energy technology to be used in a trimaran vessel.

Metallica Shipyard owner Jonathan Salvador said Tuesday, June 25, the vessel is now 50 percent complete and they will soon test it to see if it could be operated using mixed gas and ocean wave.

In February 2018, the Department of Science and Technology (DOST) has committed P78 million to fund the production of the first vessel that would utilize ocean wave in its operation.

The project is also supported by the Aklan State University, the Maritime Industry Authority, and the DOST-Philippine Council for Industry, Energy, and Emerging Technology Research and Development.

"The project, though, encountered delay due to several government-related bureaucracies but overall, the project is doing fine," said Salvador, adding they want the vessel to be ready before summer of 2020.

Since the project was introduced last year, the DOST has been showcasing the project at different exhibition sites in Roxas City, Capiz, Iloilo, and Manila.

The model-type passenger-cargo vessel is envisioned to carry 150 passengers, four vans, and 15 motorcycles. The vessel is planned to be named Dual Stroke Cylinder Pumps with 30 Units Working or Duterte.

The hybrid trimaran is designed to generate its own electrical supply from the waves it gathers from the craft's outriggers. Ocean waves will drive double action hydraulic pumps that will power a generator to produce electricity.

Salvador said the more waves the vessel encounters, more power will be produced.

"We see this technology to improve the vessel's energy efficiency, making it not only cost-efficient, but also environment-friendly," he said.

Salvador added the vessel will utilize multi-engine technology that prevents it from encountering total engine failure while at sea, minimizing maritime accidents. It will also be constructed with a specifically-engineered design to address the possibility of capsizing, making it practically unsinkable and able to withstand harsh environments at sea. (SunStar Philippines)