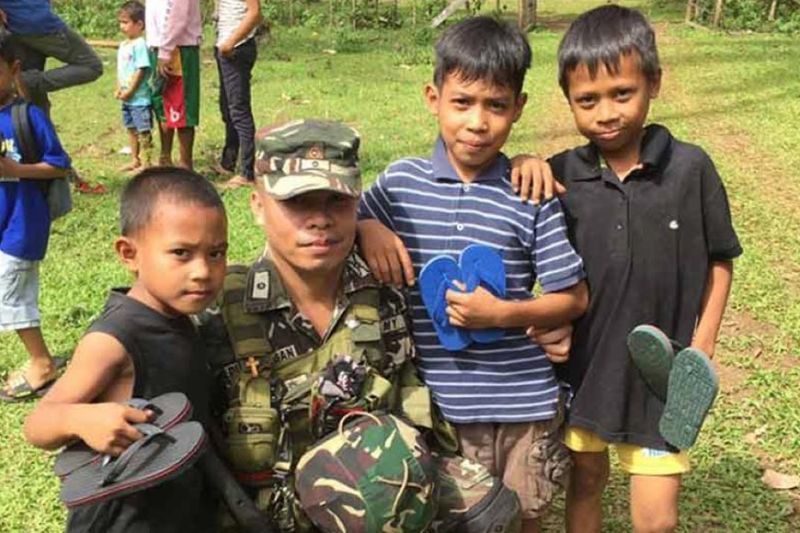 A MILITARY officer from Maasin City in Southern Leyte will now serve as acting battalion commander of the newly activated 14th Civil Military Operations (CMO) battalion of the Philippine Army.

Army Major Arturo Dumalagan, who founded the “Tsinelas Para Sa Kapayapaan (Slippers for Peace)” project, said he is determined to serve in his new assignment in Visayas together with a handful of officers and enlisted personnel.

Prior to his new post, Dumalagan was assigned as executive officer of the 12 CMO Battalion in battle-weary Marawi City.

They were in-charge of uplifting the plight of the internally displaced people (IDPs) or “bakwit” for their rehabilitation and psycho-social support services and other CMO activities that support the army units in Mindanao, he said.

“I am enjoying helping our kababayan. Dito po ako masaya makapagbigay tulong sa mga kababayan. In every place where I see poverty, it will boost my eagerness to continue my advocacy,” said the 44-year-old Army officer who also grew up in poverty in his hometown Maasin.

He has been in the military service for 19 years.

Previously, he was assigned in Bicol, Mindanao, and Samar.

Dumalagan was chosen as one of the nominees during the 2017 Search for The Outstanding Philippine Soldiers by Metrobank Foundation Inc.

His advocacy project has inspired thousands of children in poverty and conflict-laden communities around the country, enabling the Army to “win the hearts and minds” of the affected residents. (SunStar Philippines)