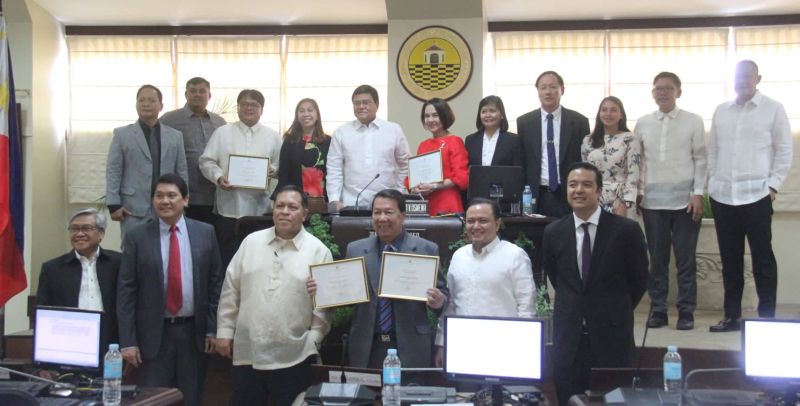 THE Cebu City Council honored on Tuesday, June 25, 2019 the three councilors who were on their third and last term.

Before the start of the last regular session of the 14th City Council, plaques of recognition were given to councilors Margarita Osmeña, Alvin Arcilla and Sisinio Andales.

Andales received another award, as the only councilor having no absences during regular sessions since 2010.

During the distribution of the plaques, the house rules were suspended.

Superbalita Cebu noticed that some members of the audience in the gallery smiled when Andales and Arcilla received their respective plaques. Both are controversial figures after they sought their respective fourth consecutive terms.

The Commission on Elections (Comelec) deemed as final and executory its earlier decision to cancel Arcilla’s candidacy for councilor of the city’s north district.

Arcilla had failed to have the Supreme Court (SC) issue a temporary restraining order (TRO) on the Comelec resolution cancelling his certificate of candidacy (COC) on the grounds that he had used up all three terms and could no longer seek another one.

The Comelec had given Arcilla only until June 21 to come up with the TRO. Andales’s case is similar to that of Arcilla, his partymate at the Bando Osmeña Pundok Kauswagan (BOPK).

Like Arcilla, Andales also filed a motion for reconsideration after his COC was cancelled by the Comelec. But he is still waiting for the decision.

The two councilors were suspended towards the end of their second term (2013-2016).

Arcilla and Andales were among the 12 councilors, along with then mayor Michael Rama and Labella, who were suspended for six months in 2016 for granting P20,000 in calamity assistance to all officials and employees of City Hall in 2013 in the wake of the earthquake and super typhoon Yolanda.

Arcilla and Andales ran for a third term in the Council in 2016 and they won. Then they filed their respective COCs for the recent May 13 elections despite the three-term limit imposed by the 1987 Constitution.

Andales and Arcilla again won seats in the council. They were among the winning candidates who took oath last June 21.

A portion of the Supreme Court’s ruling on Aldovino Jr. v. Commission on Elections states: “Preventive suspension, by its nature, does not involve an effective interruption of a term and should therefore not be a reason to avoid the three-term limitation.”

During the awarding ceremony, Labella did not explain why the other councilors were not awarded.

De los Santos and Pesquera ran for vice mayor and the city’s south district seat in Congress, respectively. They lost.

The councilors who did not seek another term were Joey Daluz III and James Cuenco.

Meanwhile, Labella said the Barug PDP-Laban would dominate the City Council if Andales and Arcilla are officially out. Guardo and Garganera would replace the two councilors.

Labella’s camp expects that 10 of the 18 councilors will be his allies in the new composition of the City Council.

Tumulak and Guardo were original members of the Barug Team Rama (former name of Barug PDP-Laban). They later jumped to the BOPK. (From PAC of SuperBalita Cebu, KAL)