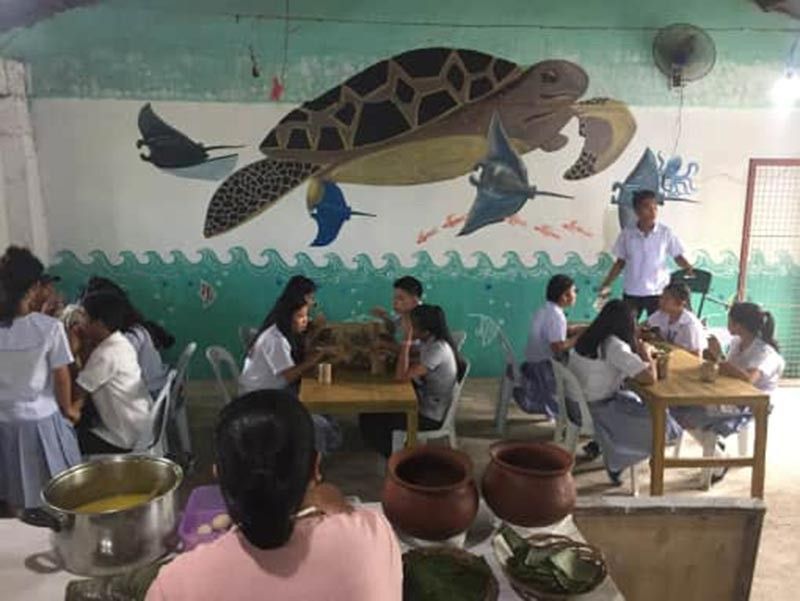 CAUAYAN. Students having their recess at the “Wala Usik” canteen. (Photo BY PRRFCI) 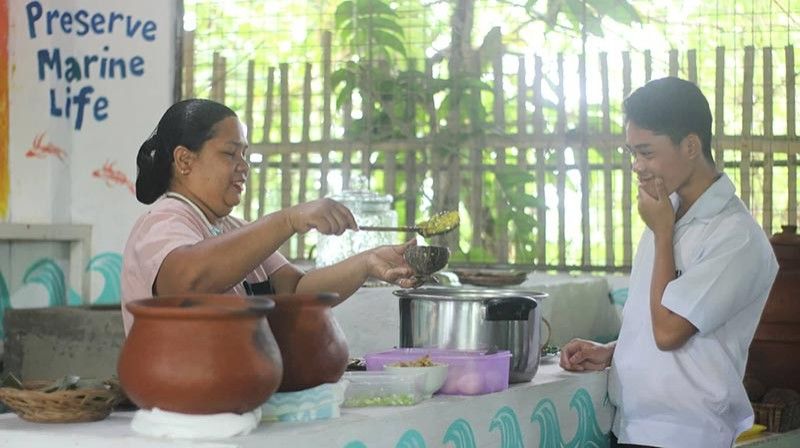 CAUAYAN. A teacher serves a student with arroz caldo in a coco bowl. (Photo BY PRRFCI) 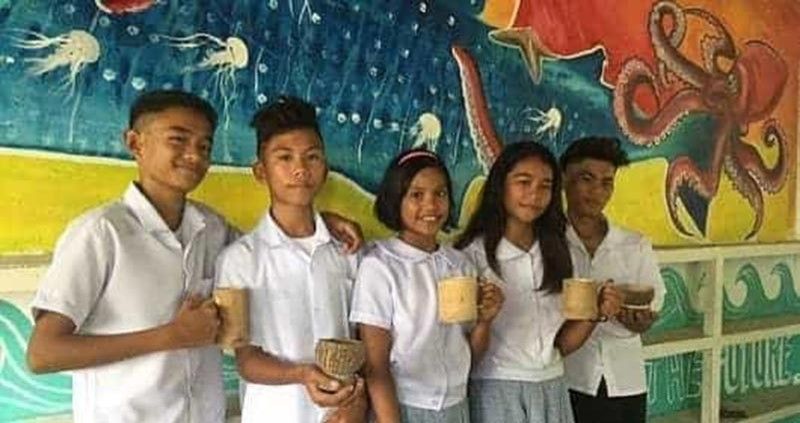 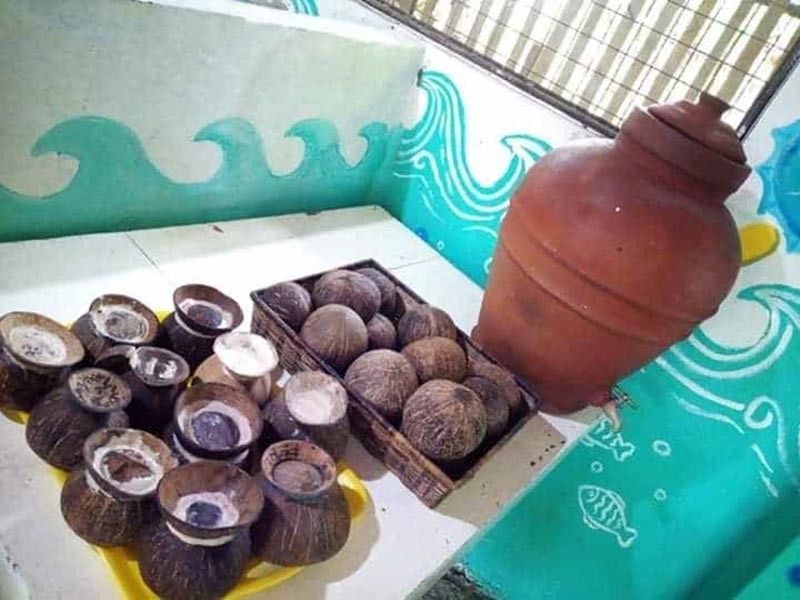 CAUAYAN. Some of the indigenous materials made by the students. (Photo BY PRRFCI) 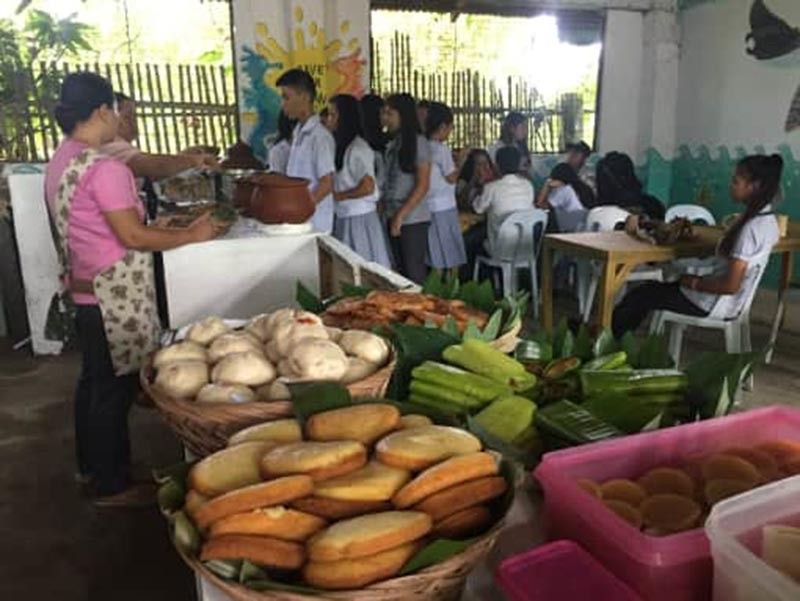 CAUAYAN. Some of the native and homemade food served at “Wala Usik” Canteen. (Photo BY PRRFCI) 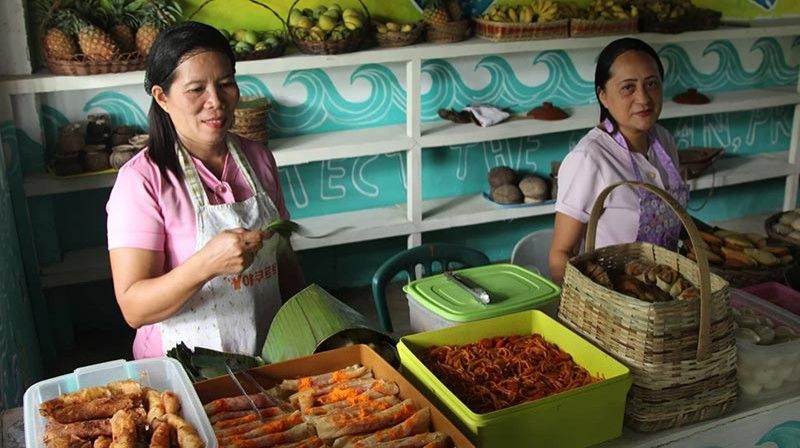 This aphorism was again proven by the Bulata National High School (BNHS) at Barangay Bulata in Cauayan town as its zero-waste initiative has started sparking a positive transformation and strong synergy towards a greener environment.

In the bid to promote a plastic-free culture in the community, the southern Negros Occidental school opened its “Wala Usik” Canteen simultaneous with the start of classes and celebration of World Environment Day and World Oceans Day earlier this month.

“Wala Usik” is a Hiligaynon phrase which means zero-waste or nothing is wasted.

The concept of the project is using only what is biodegradable, indigenous and reusable such as mugs made from bamboo, bowls from coconut shells and plates from banana leaves.

Just weeks after it started catering to 463 students and teachers, the project has gained grounds and stimulated positive change in the locality as well as in other areas in the province.

Growing up in the neighboring barangay of Poblacion, still in Cauayan town, principal Eiggy Duller Yap has recognized that natural resources are under threat of plastic pollution.

Yap, who was just assigned at BNHS this year, said plastic was a problem even just within the school premises before.

Leading the transition of their canteen, he has gained inspiration to do the project after he attended the Danjugan Island’s Marine and Wildlife Camp last summer.

Yap, an educator for nine years now, said single-use plastic is often mismanaged and causes problems to the environment as well as public health among schools nationwide.

“Why not adopt this model and reduce plastic waste at source at the same time promote what’s local,” Yap said, adding that “imagine if all school canteens in the Philippines become zero-waste.”

He told SunStar Bacolod that “the source of plastic in the school is the canteen because of candies and other products using plastic packaging. So why not go back to the old ways by using bamboo mugs and coco shells.”

The school head was further inspired by the “Wala Usik” Sari-Sari Store, an initiative of the Philippine Reef and Rainforest Conservation Foundation Inc. (PRRCFI) through its Sweep: Sea Waste Education to Eradicate Plastic program.

Launched in the said barangay in April this year, there are already eight “Wala Usik” Sari-Sari Stores operating in Negros island.

All these stores are partners of PRRCFI, the non-government organization (NGO) behind the Danjugan Island, and funded through USAID’s Municipal Waste Recycling Program.

The effort is also seen to curb plastic wastes that harm food source and life support when they reach the ocean.

Dave Albao, executive director of PRRCFI, said they are honored to be a long-time partner of BNHS since conservation work involves experiential learning and community engagement.

Albao said if more communities become conscious of how their waste is managed, they will see that the priority is how to reduce waste at the first place, especially plastic that threatens all forms of life.

“We respond to requests and invitations for trainings and workshops in schools. But in terms of implementation, we will prioritize the schools with the principals or leaders who are really committed,” he added.

The Philippines is considered the center of marine biodiversity.

It is an irony, however, that the country ranks third in terms of the volume of plastic wastes thrown based on the data reported by an international ocean conservancy group.

In a five-year trash audit released by environment group Global Alliance for Incinerator Alternatives (GAIA) earlier this year, more than 200 million plastic sachets, bags and diapers are being thrown by Filipinos every day. The biggest pollutant is the single-used plastic.

Though, it observed that “there is really a problem when it comes to garbage, especially plastic in the seas as well as other bodies of water that needs to be addressed in the province.”

Ma. Elena San Jose, technical support services head of Pemo, said while the awareness of the public on plastic pollution has to be strengthened, there is also a need for the LGUs to intensify its implementation of laws and ordinances pertaining to environment protection.

“There’s a need to instill discipline both in the community and law enforcers,” she said, adding that “this is a constant challenge that we need to keep addressing.”

At BNHS, discipline is starting to be evident as a cleaner school community already emerged just weeks after the plastic-free initiative commenced through its “Wala Usik” Canteen.

The principal said it is surprising to note that, now, every after recess, no more plastics are loitering inside the school.

For Yap, this reflects a more important initial gains of the project -- the values formation among the school children.

“It has encouraged our students to be more responsible stewards of the environment,” Yap said.

He added that “a single action of not using plastic would mean that they have developed a heart that cares for the nature and a mind that thinks of their future and those of incoming generations.”

The principal expressed optimism that their students would also stir influence to other members of their family.

Grade 12 student Sheina Parnoncillon said though they were initially “surprised” by the transition of their canteen, the students positively welcomed the project.

Parnoncillon, who is the Supreme Student Government (SSG) president of the school, said the “Wala Usik” Canteen has spurred unity and cooperation among the students.

“We are so involved in the project. Everybody is helping like in making the utensils for the canteen,” she said, adding that “we, the youth, have to act now before it gets too late.”