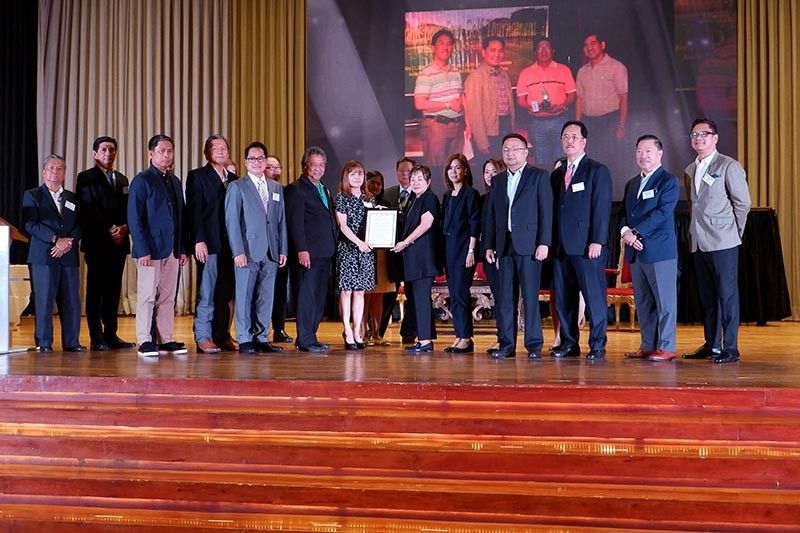 The honor was given for Laus's rallying the City of San Fernando and the province of Pampanga toward development and priming Central Luzon countryside's progress.

PamCham, together with the Metro Angeles Chamber of Commerce and Industry Inc. (Maccii) and the Clark Investors and Locators Association (Cila), presented the resolutions and portrait done by Maestro Rafael Maniago to the Laus family, headed by widow Tess Laus, during the chamber's 63rd general membership meeting at the LausGroup Event Centre in the City of San Fernando.

The posthumous resolutions of recognition cited Laus's visionary leadership and mentorship of PamCham that effectively led to fulfilling its mission of priming countryside development.

"His sage leadership made it a privilege to be a member of the board. Every month, we were witness to his perceptive insights, acute sense of appropriateness and keen discernment of the best way to push forward advocacies that will promote and protect the interests and welfare of business. You will recall that 15 years ago, PamCham assumed the role of the provincial chamber with the mission to rebuild, rehabilitate and restore Pampanga's economy from the ashes of an epic disaster. Priming countryside business became our dictum. And our direction was to unite the business community of Pampanga into a single voice, to advocate for a business friendly local environment and promote Pampanga as a viable investment destination," said PamCham Chairman Jess Nicdao.

"As PamCham moves forward sans the vital presence of our beloved chairman emeritus, all of us in the board of directors commit to continuing the work he had so perspicaciously laid out for us. We will be unwavering in this commitment and we are very confident that we will be successful because he will still be with us in spirit," he added.

For his part, PamCham president Rene Romero said: "A decade and a half ago, I approached him to consider the conversion of then San Fernando Chamber into a provincial chamber. He accepted my proposal with the condition that I will be his vice president and I will help him put together and establish a credible business organization led by prominent and advocacy-driven businessmen and businesswomen in Pampanga. The past 15 years saw PamCham grow and evolve into the influential provincial chamber it is now, thanks to the wise guidance of our dear chairman emeritus."

He added: "In his absence, PamCham is bereft of a prescient and charismatic leader. We will miss his quick-wit, perceptive wisdom and enterprising intellect in the board. But we are confident that a decade and a half of his counsel as chairman of the Board prepared us enough to stay the course and keep pursuing advocacies that will fulfill our sworn mission to promote development in the countryside and capacitate our homegrown local MSMEs grow into globally competitive enterprises."

Meanwhile, in its joint resolution, Maccii and Cila highlighted Laus's accomplishment of setting standards of corporate social responsibility through his exemplary civic advocacies that benefitted the business community; for fostering and enabling a business climate for foreign and local investments that harnessed Clark Freeport's economic potential; and for demonstrating values that will forever inspire the community.

In response, Laus Group of Companies Chairman and CEO Lisette Laus Velasco thanked the groups and all who have paid tribute to the chairman emeritus.

"On behalf of the family, I would like to thank PamCham, Maccii and Cila and all those who have recognized my father. It's been heartwarming to hear the stories and how our father has touched your lives. Maraming salamat po sa inyong lahat," she said. (JTD)