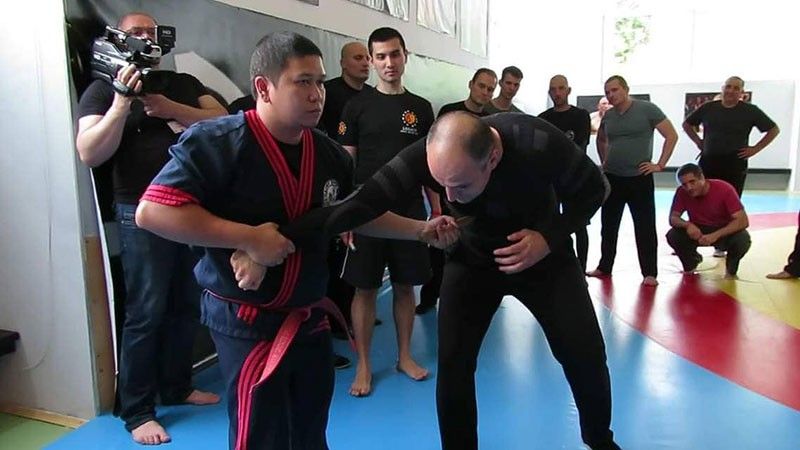 IT WAS during a break in cold Bulgaria that arnis maestro Chuck Cañete, of the Cacoy Doce Pares system, got to talk more about Cebu the island, rather than Cebu the home of arnis legends.

“It was very cold there and I told them about our weather here,” he said in Cebuano during an interview over coffee.

And just a few clicks off trusty old Google in his smart phone, pictures of Cebu’s pristine beaches elicited “oohs” and “aaahs” from his European students, who promptly planned a visit to Cebu in the next few months to test what the grandson of the legendary Cacoy said of its beaches.

That has been his accidental role since he first traveled to Europe in 2015 to spread arnis the Cacoy Doce Pares way. He continued it with extended trips in 2018 and 2019 and thanks to his promotion of Cebu, the negative image the Philippines has in the minds of the Europeans he encountered has been eased somewhat.

“They are afraid of the Philippines because of the news,” he said.

An understandable assessment from Europeans considering a colorful president who has a colorful way of saying things and who had, in the past, cursed the European Union.

“I always tell them that Cebu is very safe,” he said.

So far, his convincing powers have led to two European teams joining four others in the SGM Cacoy Cañete Centennial Cup on Aug. 8 to 11. The Europeans, one from Bulgaria, will be joining teams from Australia, Mexico, Reunion Island and the US for the three-day event that will also have a Cacoy Cañete Boot Camp.

The Boot Camp isn’t just a clinic for arnis as it will also promote Cebu’s tourists spots to where the foreign teams come from. And in these days of Social Media, where an interesting picture could go viral in a minute, the experience of the foreigners may prod some of their countrymen to take a similar visit.

“We will go to the different tourist spots in Cebu for the clinic. That way, not only do they get to learn arnis, they also get to enjoy the beaches and the people,” he said.

Aside from the foreigners, there will be teams from Mindanao and the Visayas and Cañete is hoping the newly-established Philippine Eskrima Kali Arnis Federation (Pekaf)will support their tournament.

Like most of the other arnis teachers who have gone abroad, Cañete experienced firsthand how foreigners love arnis more than Filipinos.

And he has quite an experience. In 2015, he went to Norway. In 2018, he went to Germany, spending two weeks to teach in two clubs in Rodgau and Wetzlar. Just last month, he went to Kristiansand, Norway, teaching arnis to the students of the Kristiansand Camp Sports Center, thanks to the invitation of Richard Haye.

“The camp also had kickboxing, jiujitsu and other martial arts,” he said, and added he taught kids, teens and even adults who already have a background in kickboxing.

He also spent some time in Oslo, the country’s capital, before moving to Bulgaria for a couple of days to teach arnis.

And it’s not just eskrima that he teaches, but eskrido, a version of arnis that has elements of Doce Pares, aikido, jiujitsu and judo founded by the late Supreme Grandmaster himself, Cacoy Cañete, whose centennial birthday the club will be celebrating next month.

While arnis in the Philippines is trying to break away from a sordid past, when who you knew was more important than what you knew when it came to joining tournaments with the formation of Pekaf, Cañete revealed that in Europe, they don’t care about politics or about which group you belong to.

“They are more open to learning. They don’t care about affiliations,” he said. “For them, because there are so many styles and martial arts, it’s always a new material for them.”

And sometimes, his students get a “light bulb” moment once he shows them a particular move.

Unlike some gung-ho martial artists who think small, Cañete believes there is no perfect system.

“There is no perfect system; all have weaknesses. What is important is you learn,” he said.

Learning for some comes late. He told the tale of an elementary school classmate who contacted him via social media. He had transferred to the US and learned about arnis there. He picked up the sport and started learning from teachers who travel to Cebu—his hometown—to learn the martial art.

A perfect combination of sports and tourism. (ML)