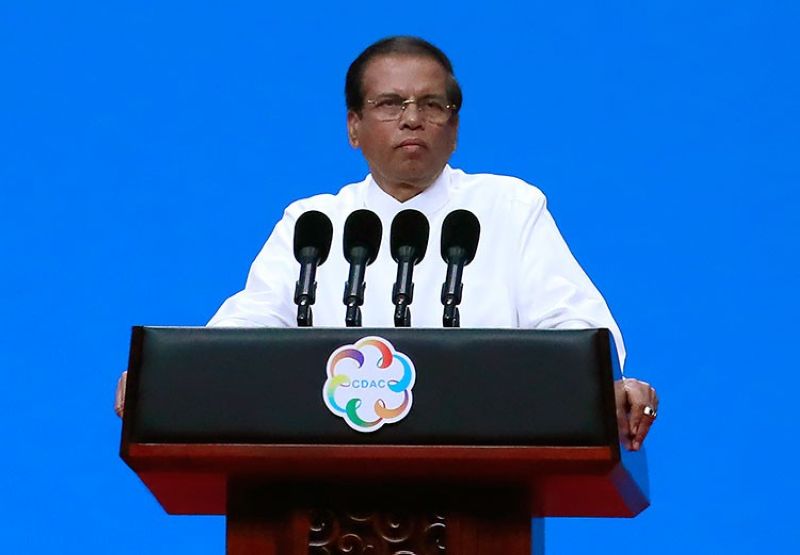 SRI LANKA. In this May 15, 2019, file photo, Sri Lanka President Maithripala Sirisena delivers a speech during the opening ceremony of the Conference on Dialogue of Asian Civilizations in Beijing, China. (AP)

COLOMBO, Sri Lanka -- Sri Lanka's president said on Wednesday that he has ordered the executions of four drug offenders who will be hanged in prison soon, amid alarm over drug-related crimes in this Indian Ocean island nation.

The executions if carried out will end a 43-year moratorium on capital punishment.

President Maithripala Sirisena told a media discussion on Wednesday that he has signed the death warrants including the days of the executions and sent them to prison authorities.

He said narcotic drugs have become a serious menace across the country with 300,000 addicts. According to Sirisena, 60 percent of 24,000 inmates have been jailed for drug-related offenses. Sri Lanka prisons are built to accommodate 11,000 people.

Sri Lanka last executed a prisoner in 1976. Currently, 1,299 prisoners are on death row, including 48 convicted of drug offenses.

Prison authorities are now in the process of recruiting two hangmen after two others quit without executing anyone.

At present, 26 people have been shortlisted for training, which ends on Friday, after which two will be selected, said Bandula Jayasinghe, an official at the Justice and Prison Reforms Ministry.

Drug trafficking is a capital offense in Sri Lanka, which authorities believe is used by peddlers as a transit hub.

Rights groups and foreign governments including the EU have previously criticized Sirisena's suggestions to revive the death penalty, saying there is no perfect criminal justice system and the risk of executing an innocent person can never be eliminated.

Sirisena, who visited the Philippines in January, praised President Rodrigo Duterte's crackdown on illegal drugs as "an example to the world." Thousands of suspects, mostly urban poor, have been slain since Duterte took office in 2016. Rights groups have denounced what they say are extrajudicial killings. Police say most of the suspects were killed in encounters with officers.

Sri Lanka is predominantly Buddhist, a religion that advocates non-violence. Sirisena has previously said the country has had positive influences from all religions but tough law enforcement is necessary to curb crime and maintain order.

Marijuana is the most widely used illegal drug in Sri Lanka, followed by heroin and cocaine. Drug-related arrests rose two percent in 2017 from the previous year to 81,156. (AP)