Editorial: A regime of red herrings 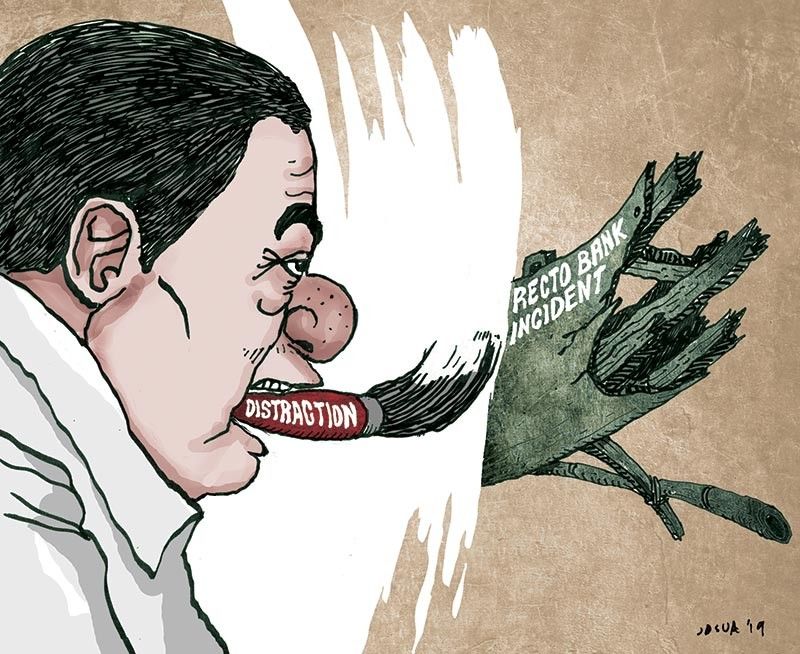 IT ISN’T as though discussions on the Recto Bank incident that nearly drowned 22 fishermen had progressed that we are now talking breathlessly about the citizenship of fishes, courtesy of that comic in the Senate.

Remember the usually spitfire President Rodrigo Duterte, in mysterious silence since the incident two weeks ago, emerging with the sober statement that the Philippine reaction should be informed by facts. Good, except that when it broached the idea of a “joint probe” with China, it dropped another layer of debate.

Some two weeks, yes, and all we have are sideshows that steal away our focus from the hit-and-run incident. Granting that the so-called collision was an accident, the point that had been inadequately explained was why the 22 Filipino fishermen were left “at the mercy of the elements.” If the Chinese trawler was really scared like hell of being ganged up by a fleet of Filipino boats nearby, why was it that it was a Vietnamese boat that rescued the fishermen? Satellite data, as explained by a Filipino maritime expert, showed that F/S Gemver and the Chinese trawler were the only ones in that corner of the Recto Bank. With that much space, consider just how fantastical the collision story is and how plausible the intentional ramming tale is.

There is a multitude of questions to be asked about the incident and it wasn’t as though the victims themselves aren’t alive to tell the tale. They are and look how they twist the tales after government envoys had dropped by for some closed-door briefing.

Had it been one case that did not involve China, we would have had the tough-talking Duterte already bursting with the usual expletives. But, no, this President wants his business with China uninterrupted and so he decides to be meek with his “calculated response.” Go to war with Canada or the US, but not with China. You can imagine this regime mounting a “Don’t Disturb” sign as its minions negotiate business deals in the boardrooms with, yes, China.

And so you can see the amount of determination this regime has in parrying just about any hint of distraction that muddles up its Chinese connection. It’s all business interests, forget about sovereignty.

The saddest thing is that despite the pattern of aggression and poaching by China on our sacred territory, a large bulk of the populace continue to buy the language game that should we react, we go to war that will reduce us to a pulp. Dear, diplomacy isn’t duotone.

We expect soon a saturation of stories of just how the Philippines’ Chinese connection has brought a big wave of blessings on our shores. That’s how we bury away the tale of the 22 fishermen, their near-death experience and the whole pattern of Chinese insults in the West Philippine Sea.