Duterte: Impeach me, I'll put you in jail 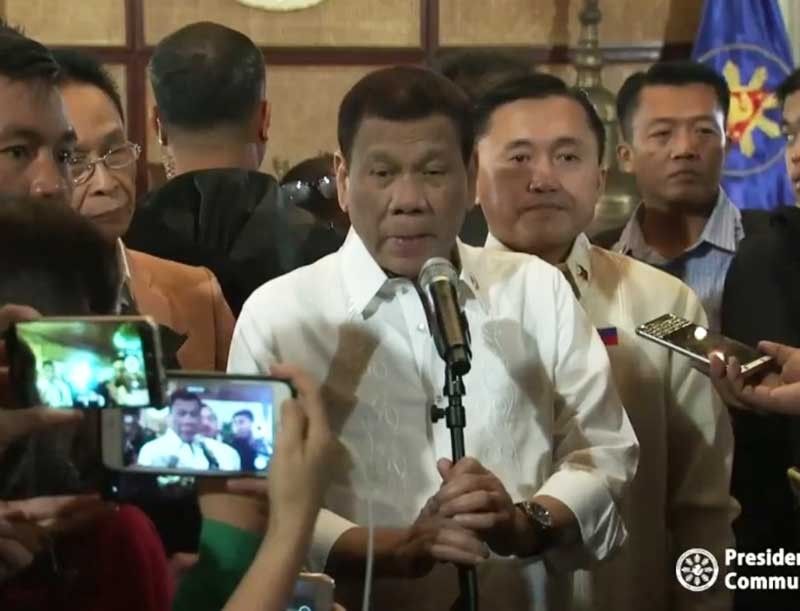 PRESIDENT Rodrigo Duterte on Thursday, June 27, threatened to throw in jail those who will try to impeach him.

"I-impeach mo ako? I-deliver ko kayo sa jail lahat (You will impeach me? I will deliver you all to jail). You try that. You want me not only to violate the Constitution," the President said in a chance interview with Palace reporters on Thursday.

He thumbed down the constitutional provision stating that only Filipinos can fish in the Philippines's exclusive economic zone (EEZ), saying that such clause is just for the "thoughtless and senseless."

Article 12, Section 2 of the Constitution mandates the Philippine government to "protect the nation's marine wealth in its archipelagic waters, territorial sea, and exclusive economic zone, and reserve its use and enjoyment exclusively to Filipino citizens."

"That is a provision for the thoughtless and the senseless. The protection of our economic rights about the economic zone resolves this? I am protecting the country and 110 million Filipinos," the President said.

"Alam mo ganito yan eh. Ang China ganito 'yan, parang Filipino, hindi mo pwedeng hiyain. Magwa-wala yan at magpu-putak, puputahin kayong lahat, ako (This is the case, China is like the Philippines. You cannot shame it. It will go against you and rebuke you and me. That's the case)," he added.

He warned that invoking the Philippines' 1987 Constitution would only trigger war between Manila and Beijing.

"We do not need to give or disallow China [from fishing within the Philippines's EEZ] because in the mind of China and everybody else down to the last soldier and citizen, kanila 'yun kaya nga kinuha nila eh (they own it that's why they seized it)," the President said.

"Ako kung sabihin, you present to me a Constitution like that and we have this ruckus claiming the same place in our jurisdiction, sabihin ko, kung wala kang pang-ilo gamitin mo 'yang Constitution mo. Because that means war. And that piece of paper, the Constitution, will become meaningless with no spirit except desperation, agony, and suffering," he added.

(If you present to me a Constitution like that and we have this ruckus claiming the same place in our jurisdiction, I'll tell you, if you don't have any toilet paper, use your Constitution. Because that means war. And that piece of paper, the Constitution, will become meaningless with no spirit except desperation, agony, and suffering.)

His statement came after his critics claimed that he committed an impeachable offense when he said he would not stop Chinese fishermen from fishing within the Philippines's EEZ.

One of his fiercest critics, detained Senator Leila de LIma, said Duterte' pronouncement was clear ground for impeachment for "culpable violation of the Constitution, treason and betrayal of public trust."

Duterte, however, maintained that he cannot confront China over its fishing activities in Philippine waters as this would only sow tension. (SunStar Philippines)