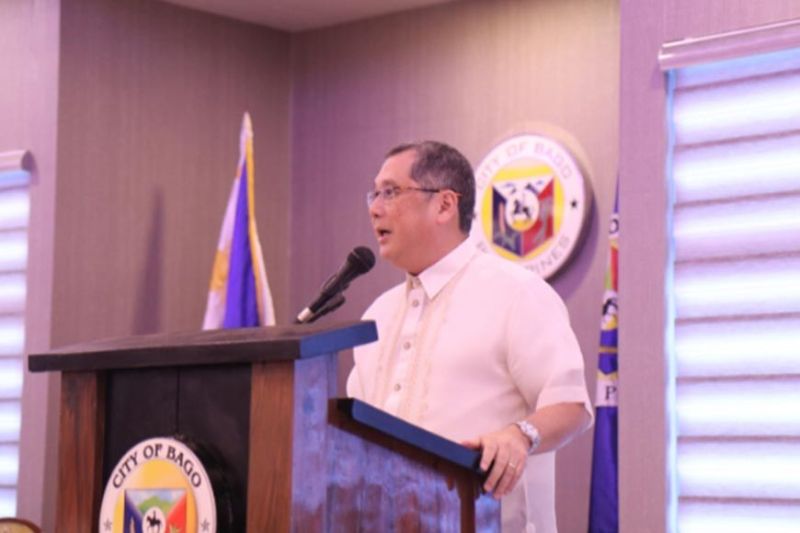 BAGO City Mayor Nicholas Yulo delivered his State of the City Address or the Paalinton sa Bagonhon during the 1,982nd Regular Session of the Sanggunian Panlungsod on Wednesday, June 26, 2019.

In his speech, Yulo bared the gains of his administration on Agricultural Productivity and Tourism Promotions and Development, his two important agenda.

The city was also 263.8-percent rice sufficient in 2018. This was validated by the 2017 and 2018 National Rice Achievers Award given by the Department of Agriculture.

In tourism promotions and development, Yulo boasted of the ongoing development of Bantayan Park into a premier tourist destination.

The Department of Budget and Management will fund the riverfront park in the amount of P19 million through its Green, Green, Green program.

The mayor also cited the best areas of administrative, economic, social, and environmental governance in Bago under his administration. He highlighted the steady increase on revenue collection of Bago particularly in its income and tax collection.

In human resource management, the Civil Service Commission will award the City Government of Bago with the PRIME HRM Maturity Level 2 this coming July 24. Bago is one of the 3 LGUs in the province to be awarded with such recognition, the mayor added.

The mayor also reported the influx of investments in Bago that would mean jobs for the locals and increased economic activity in the locality. He also mentioned the environmental initiatives of the City which are among the best in the region. He also cited the City Disaster Risk Reduction and Management Program which continue to harvest recognitions in Gawad Kalasag in the provincial, regional, and national levels.

The mayor also mentioned in his one hour speech all the Bagonhons who excelled in the national and international sports arena particularly boxer Rogen Ladon who finished silver in the 2018 Asian Games.

Mayor Yulo said that in the next three years of his administration, he will give focus on improving the operation and services of the city owned Bago City Hospital and Bago City College.

He asked the people of Bago “to be one with me as we continue to journey towards public service.” He also challenged the department heads of both the local and national government present to develop interventions and initiatives while promoting the core values of the LGU to the Bagonhons.

The speech was interrupted several times by the applause of the audience. At the end of his speech, the audience gave Mayor Yulo a standing ovation for his report to the people of Bago. (PR)