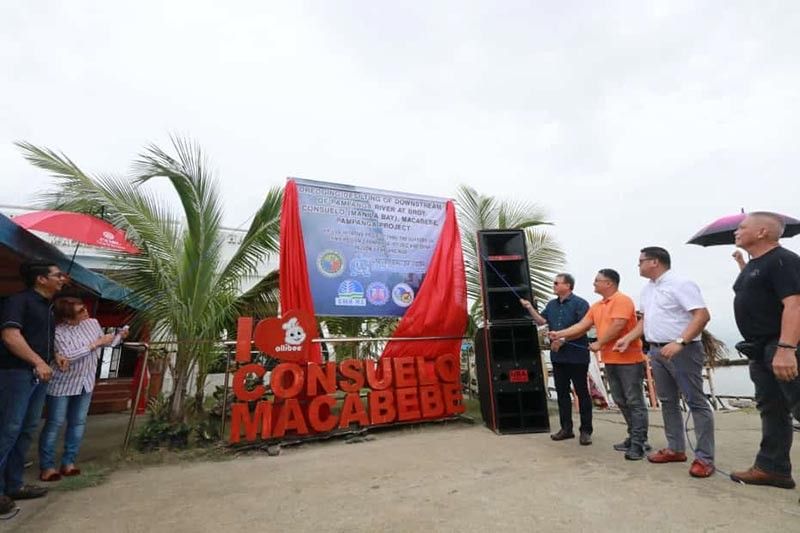 MACABEBE -- Massive dredging and desilting activities will be conducted at the downstream portion of the Pampanga River, particularly at the portion of this town, to ease the perennial flooding problem here.

The local government here, together with the Department of Public Works and Highways (DPWH), Department of Environment and Natural Resources, and project contractor Universal De Leon Construction and Aggregates (UDLCA), led the launching of the project at the coastal barangay of Consuelo on Thursday morning, June 27.

According to Oliver de Leon, chief executive officer of UDLCA who will facilitate the project, said he will be deploying a backhoe on barge at the opening of the Manila Bay to dredge the heavily-silted portion of the waters.

“We will be deploying one backhoe first to check on the quality of the sediments that will be dredged. If it is really pure mud, we will need to use a dredger that is specialized for such kinds of sediments,” De Leon said.

He added that the dredging and desilting activity will be continuously conducted in the next 10 years to ensure that Manila Bay can finally accommodate the flowing water from the upstream during rainy season.

De Leon also assured stakeholders that implementation of the project will be continuous even during the rainy season, since dredging activities will be on cove areas, and will not be much affected by the big waves.

DPWH 1st Engineering Office engineer III Jayson Jauco, meanwhile, pledged the support of the agency in the monitoring of the program to ensure that it will be aligned with the other flood-control projects being implemented.

He also lauded the local government for initiating such project which will not only help solve the flooding in town, but will also affect the flow of water from the upstream portion of the region.

“We are very grateful to the local government for initiating such project which will supplement the ongoing and proposed flood-mitigation projects implemented in the region,” Jauco said.

Outgoing Mayor Anette Flores-Balgan, meanwhile, said the project is a product of four years of perseverance and dedication to save her hometown and fellow residents from the worsening flooding problem.

“I feel really sad and pitiful for my town and kabalens, especially the poor who spend most of their money to upgrade their houses but after three years, floodwaters will catch up to them, destroying the little investments they poured on their houses,” she said.

“I am not really fond of lobbying projects to the agency and department heads but I braved it this time for the sake of my town and my kabalens. And I am happy that they saw the project’s importance and its expected benefits to us,” Flores-Balgan added.

The three-termer mayor also disclosed that the government will not be shelling out a single centavo for the project since it will be implemented under the private-public partnership program.

Flores-Balgan, who is set assume the vice-mayoralty position come July 1, also assured her constituents that she will be strictly monitoring the project to ensure that it will be properly implemented.

“This is my brainchild and I assure that it will serve its purpose of saving our town, my kabalens from the threat of flooding,” she said.