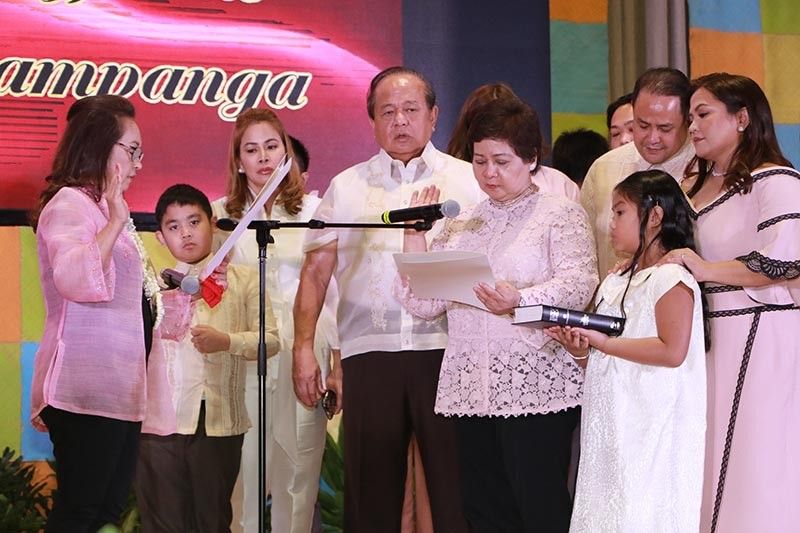 ELECTED officials of the Province of Pampanga took their oath before outgoing House Speaker and Pampanga 2nd District Representative Gloria Macapagal Arroyo Saturday, June 29, at the LausGroup Event Centre in the City of San Fernando.

In his homily, Lavarias urged the newly elected officials not to forget God in the conduct of their government functions.

“Ask God for humility as you begin your new terms,” Lavarias said.

Vice Governor Pineda also gave her valedictory address as outgoing governor, praising the support of Speaker Arroyo. Pineda, who veered off from a prepared speech, said she will still be active in helping Kapampangans even if she is to assume a more legislative role in the provincial government.

The elder Pineda will always be remembered for her health programs. Pineda’s administration has spent more than P1.7 billion for health facilities and programs for the province.

At the start of her term, the governor went into a construction spree of 11 public hospitals in the province, building new facilities and renovating dilapidated health infrastructure.

Pineda urged newly sworn officials to set aside political differences and start with moving forward for the development of Pampanga.

Speaker Arroyo, for her part, highlighted the Pampanga Development Plan as common ground for cooperation for elected officials.

In her speech, Arroyo said that she was asked to serve as consultant for the Provincial Government of Pampanga.