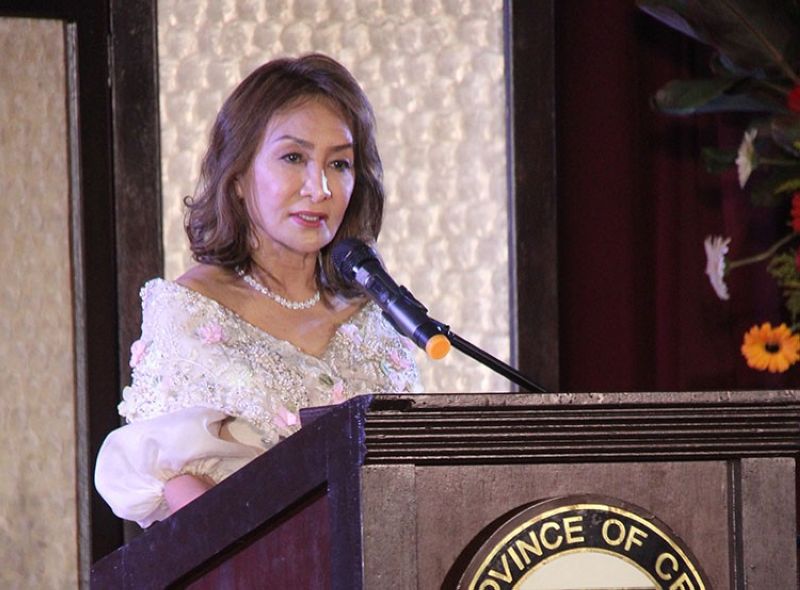 CEBU. Returning Cebu Governor Gwendolyn Garcia announces a raft of measures to solve perennial problems like traffic, garbage and water supply during her inauguration ceremony at the Social Hall of the Cebu Provincial Capitol on Sunday, June 30, 2019. (Amper Campana) 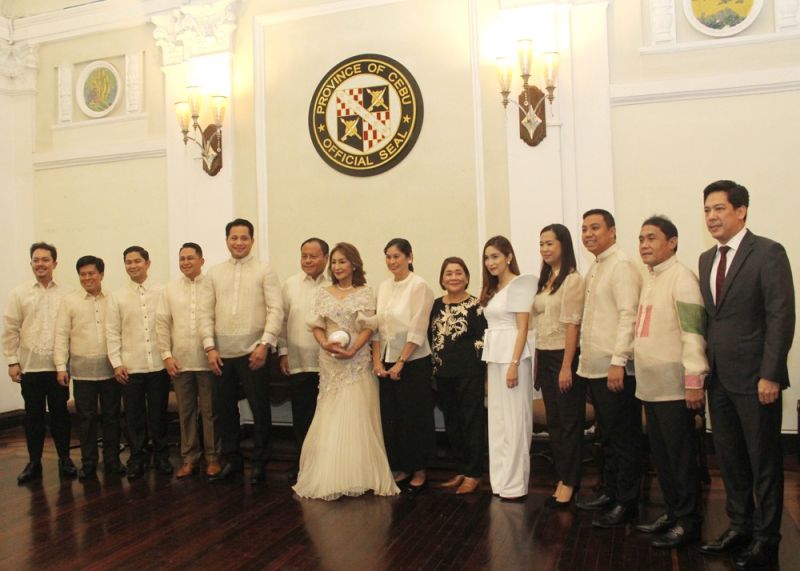 CEBU. Cebu Gov. Gwendolyn Garcia (center) poses with the new members of the Provincial Board during her inaugural ceremony on Sunday, June 30, 2019. Garcia’s win in the May 13 elections catapulted her to a fourth term as governor. (Amper Campana)

AFTER a six-year absence at the Capitol, Cebu Gov. Gwendolyn Garcia is back and she has a singular focus—to make the province number one again.

To get back Cebu’s status as a premier province, Garcia said she will work hard for it, and address the perennial problems of traffic, garbage and water supply.

“Indeed, before 2013, it had never been in doubt: Cebu was the number one province in the entire country. We were number one in assets, in total income and competitiveness. Despite our heavy investments in physical and human infrastructure, we remained debt-free,” she said.

Garcia ended her third and last term in 2013, but she was served with a six-month suspension in December 2012 for grave abuse of authority in hiring contractual employees.

In her speech, she did not mention the name of her predecessor and now Vice Gov. Hilario Davide III. But she slammed Davide’s administration for leaving provincial roads in a “sorry state of despair” and for making projects dependent on the colors of politics.

“For an administration that projects itself as clean and ‘corrupt-free,’ we are, for the first time in the history of this Capitol, purchasing heavy equipment at more than 200 percent of their actual price, and selling or attempting to sell provincial property at a floor price of less than 50 percent of their fair market value,” she said.

She said the P1.5 billion facility will not be part of her programs of government, describing the project as a “monstrosity that would eclipse and debase” the Capitol building, which is considered a heritage structure.

“Why build it in this city that does not contribute a single cent to the province’s coffers and yet leave the burden of debt to the taxpayers of the province, all for a building that has absolutely no relevance to their lives or their livelihood?” she said.

Garcia, Davide and the 14 new Provincial Board (PB) members will start their official duties on Monday, July 1, 2019.

An inauguration ceremony was held on Sunday evening, June 30, 2019, marking the return of Garcia to the Capitol after six years of serving the third congressional district as its representative in the Lower House.

On the same day, Davide took his oath of office before former vice governor Agnes Magpale at the Casino Español de Cebu in Cebu City. His family attended.

Davide was not surprised by Garcia’s decision not to renew the contracts of nearly 2,000 contractual employees.

He hopes that the practice of replacing irregular employees by a new administration would be stopped, saying there are hardworking job order employees.

The former governor decided not to seek a third consecutive term in the May 13 elections. He ran for vice governor, while Magpale chose to run for the governorship. Davide won, but Magpale lost to Garcia.

On July 1, Davide will pay a courtesy call on Garcia after the first flag-raising ceremony of the newly elected officials. The PB will hold its inaugural session on the same day.

In her inaugural speech, Garcia said instead of moving forward, the province has to retrace its steps to achieve progress.

Under her leadership for the next three years, the governor plans to establish a definitive inter-local government unit solution to Cebu’s worsening traffic condition.

Along with an integrated traffic plan is the implementation of a “workable” mass transport system from Carcar City in the south up to Danao City in the north.

Garcia is also eyeing the development of more bulk water supply and distribution systems to bring tertiary level water systems to every barangay.

For solid waste management, the governor sees the establishment of waste-to-energy facilities as a viable solution.

She also wants to upgrade the facilities and services of provincial and district hospitals.

“I am your governor again, humbled by the long, difficult road that has brought me here to this unprecedented and historic fourth term. I would call this a personal vindication were I not mindful of its larger significance for Cebu and the Cebuanos. It is a mandate to work, work, work as we have never before and responsive government to every Cebuano family,” Garcia said.

Aside from her programs of government, the governor also mentioned the failed attempts to divide Cebu—the Sugbuak proposal.

The Cebuanos, she said, played a huge role in keeping the province’s leaders united.

“Your leaders heard your message loud and clear. Soon, the executive and legislative came together and pledged to work as one. In the cities and towns, mayors, vice mayors, councilors and barangay officials forged a unity never before known in Cebu political history. The cry: there can only be one Cebu. Cebu is number one because we are one,” Garcia said.

During her earlier stint as governor, Garcia said women empowerment was encouraged through livelihood programs by providing resources for both training and capital.

For tourism, culture and heritage, the Capitol launched the “Suroy-Suroy Sugbo” and the “Pasigarbo sa Sugbo.”

Garcia said the province was able to secure its place in the world stage by hosting the 12th Association of Southeast Asian Nations Summit at the Cebu International Convention Center in Mandaue City in 2007.

Garcia still cannot forget her suspension in December 2012. Magpale, then the vice governor, served as the acting governor.

“Today we suffer still from the consequences of that power grab. From being the number one province, then we plunged into a precipitous drop reaching our lowest at number 45 in a field of 81 provinces. From being totally debt-free, our province is now burdened with a P1.5 billion debt,” she said. (WITH SCG OF SUPERBALITA CEBU / KAL)