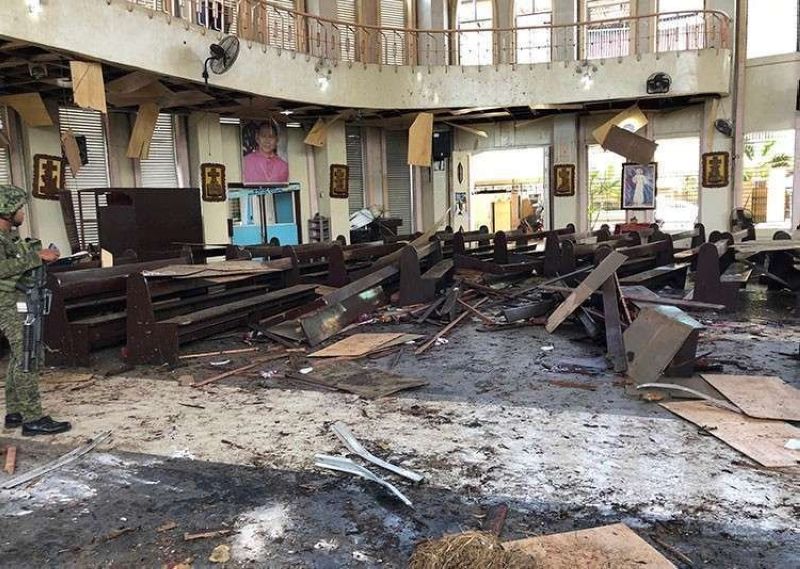 SULU. The interior of the Our Lady of Mt. Carmel Cathedral in Jolo, Sulu was destroyed after the twin bombings on January 27, 2019. (File Photo)

BASED on initial assessment, authorities said the suicide bombing attack on a military camp in Indanan, Sulu was similar to the twin bombings at the Jolo Cathedral in January 2019.

Major General Cirilito Sobejana, head of Western Mindanao Command, said there is no difference in the execution of the two attacks, especially in the use of mobile phones to detonate the improvised explosive devices.

Both attacks, believed to have been perpetrated by Islamic State-inspired Abu Sayyaf Group led by Hatib Hadjan Sawadjaan, have caused "much concern" within the Department of National Defense, said Secretary Delfin Lorenzana.

He noted that the Indanan bombing was already the third incident despite the martial law in Mindanao. The other bombing incidents targeted the Our Lady of Mount Carmel Cathedral in Jolo and a checkpoint in Lamitan, Basilan.

The Indanan bombing killed eight people as of Monday, July 1. Three civilians who were among the wounded expired aside from the three soldiers and two alleged suicide bombers who were killed during the attack on June 28, 2019.

The Jolo Cathedral bombings on January 27, 2019, which were also perpetrated allegedly by a couple of suicide bombers, killed 23 people, including several uniformed men. At least 95 other uniformed men and civilians were wounded.

Investigation showed that the couple, who were carrying backpacks, entered the Our Lady of Mt. Carmel Cathedral in Jolo while a Mass was being held.

Minutes after they were seated, the man left the church. The IED carried by the woman was the first to go off. It was immediately followed by another IED explosion as the man reached the church's parking area.

Sobejana said they were still establishing the identities of the attackers. But he said the second alleged suicide bomber was a boy who looked like the Moroccan suicide bomber responsible for the July 31, 2018 bombing in Lamitan City which resulted in the killing of at least 10 people.

(We are monitoring foreign terrorists. The child who entered the camp was suspected to be the son of the Moroccan behind the bombing in Lamitan, Basilan. His body was blown to pieces. Only one of his feet was intact.)

Meanwhile, Philippine National Police (PNP) Chief Oscar Albayalde said the carrier of the first IED was believed to be a Filipino.

Both Albayalde and Sobejana said it was the first time that a Filipino served as a suicide bomber.

Defense secretary Delfin Lorenzana said they were positive that the Indanan attack was another case of suicide bombing.

“It is evident from the report because this guy knocked on the gate, so the guard went near to ask what the person [needed]. So when the guard was at the gate, the person exploded, so this is obviously a suicide bombing,” he said.

“Personally, I think it’s a suicide bombing because he was carrying the bomb and he detonated it within the perimeter. There were two of them actually,” he added.