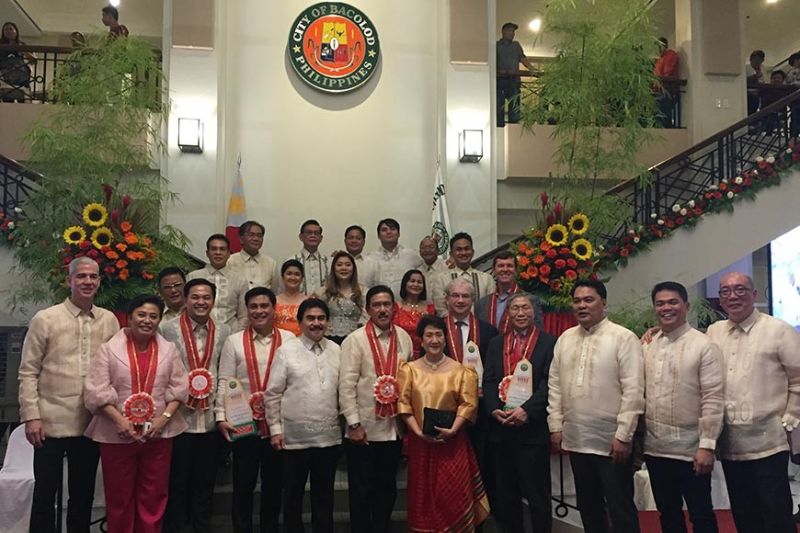 “We challenge you for the next three years to again showcase for the Visayas, the success and the development of Bacolod City.”

This was the challenge of Senate President Vicente Sotto III to the newly elected officials of Bacolod City during the inauguration and oath-taking ceremony at the Bacolod Government Center last night.

He said there should be an improvement in local governance, all over the country, not only in Bacolod.

“But particularly in Bacolod, it will be a good example for the entire Negros Occidental if we can fortify and upgrade the local governance. Perhaps, there will no longer be any issue on federalism if the local government units are given enough power and their power is expanded,” he added.

President Rodrigo Duterte, in a video, gave a message to Leonardia, Gasataya and Familiaran.

Zubiri also congratulated the newly elected officials of Bacolod and in Negros Occidental.

“I’m happy so happy to be here again to officiate the oath of the one of the leaders and I’m so happy to be home and I wish them luck, we have three years to continue the changes that we have pursued. With these new leaders, I believe that the direction of Bacolod is going to be upward and it’s going to be for the development of Bacolod,” Zubiri said.

Romero congratulated the newly elected officials of Bacolod City while Senator Franklin Drilon failed to attend the event due to bad weather in Iloilo City.

“The future is uncertain. The road that we will take towards the future will not assure us of everything we want to happen however, we will do our utmost best to see to it that Bacolod City becomes a better place to live in and becomes one of the most progressive cities in the Philippines today,” he said.

“Let me appeal to my beloved people of Bacolod, let us climb every mountain together, let us search high and low and let us follow every rainbow until we fight our dream,” he said.

For his part, Gasataya vowed to continue his programs on social services, health, sports and infrastructure projects in the city.

“It is with a deep sense of gratitude that I accept the mandate you have given to me to serve my second straight term as your representative. I wish to take this opportunity to show my deepest gratitude to my beloved wife Meita, my children, and our entire family for staying strong and being my rock through the tough times,” he said.

Familiaran for his part said he’s been in public service for the past 31 years since he started as village chief.

“This is a continuation of our public service and there’s a lot of work to be done. I am appealing, asking the help of everybody. Let us unite and help each other to address the problems in the city.