Bzzzzz: Radaza may insist on office space; Chan decides where 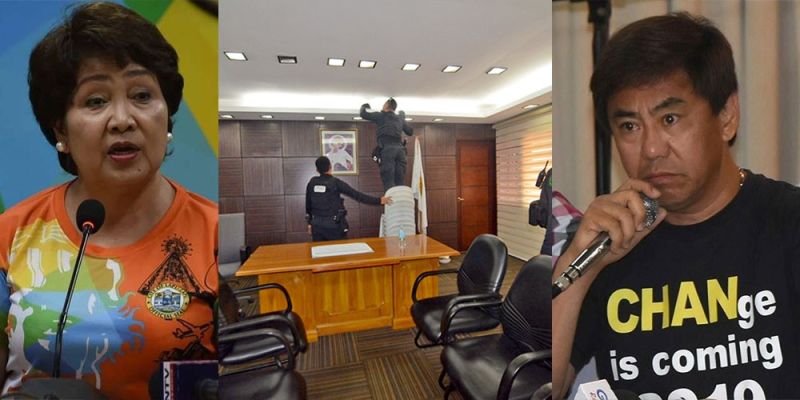 * IMELDA, 90, AND HER BIRTHDAY CAKES. They don't put up all those candles anymore but former First Lady and congresswoman Imelda Marcos, who turned 90 Sunday (June 30), had a whole lot of birthday cakes instead.

Pointing to the cakes, she said, "You see what I told you -- the only things you keep is what you give away. I may be gone but these will be forever." Obviously not the cakes but the government buildings she initiated and built.

* 'DEMOLISHER TWO.' Before the issue of Tomas Osmeña gutting the mayor's office will go away, there's a second "demolition job": by Mary Ann de los Santos who reportedly stripped her councilor's office bare, but with less ferocity than Tomas did.

Not just about an office

The stand-off between Representative Paz Radaza, newly elected congresswoman for Lapu-Lapu City's lone district, and City Mayor Junard Chan regarding the use of office space at City Hall may be resolved Ahong's way.

For now, Congresswoman Paz, who replaced his daughter Aileen, may insist on keeping the City Hall office that a city ordinance reportedly assigned to the city's House member. But Mayor Ahong, citing lack of rooms at City Hall, had given Paz 24 hours to vacate the City Hall space. The ultimatum issued last July 1 was probably the offshoot of Paz criticizing Ahong for his "imported" department heads at City Hall.

"Cong" Paz's basis is a supposed ordinance passed on June 6, 2019. Ahong may have to respect that legislative intent until the City Council will revoke it.

But here's the thing: The mayor runs City Hall and manages its resources. Logically, Mayor Chang, through his city administrator, can transfer "Cong" Paz's office to another room in the building -- until he can muster enough votes in the City Council to revoke the ordinance.

Each House member has appropriated funds for upkeep: from travel expenses to office staff salaries and supplies and other allowances. That, aside from the basic pay. And the outlay for offices include home district offices. It is not known how that works but the lump sum indicates that it is up to the House member to decide where he or she will put up the office.

In "Cong" Radaza's case, it looks like she wants Lapu-Lapu City Hall to spend for her district office , instead of paying rent elsewhere or having it in her house. And she provided for it before she left the mayor's office: convenient, neat.

Interesting "trivia": News reports say the ordinance granting the office space was passed "on June 6, 2019," 24 days or so before the term of the City Council and the mayor at the time, now "Cong" Paz, expired. Had her predecessor, daughter Aileen. been using that space already and the ordinance was passed as "last-hour" safeguard against its being taken away?

He wouldn't be made "bankrupt" by any such boycott, he said, he would even be glad not to see them there.

One of the 10 richest TV evangelists in the country, Quiboloy is not likely to be impoverished even if all his McDonald's food shops were shut down. Besides, his own flock would be enough to keep them operating.

In a broadcast Monday night, television evangelist Quiboloy, who has his own media network, challenged Pastor Joel Apolinario of Kapa Ministry International to return the money invested by its members. "Apolinario is hiding with the money invested in Kapa," he said, he should give it back.

Comparing Apolinario to donations to KJC, Quiboloy said he has not induced people to give him money with the promise of paying them interest.

Quiboloy heaped a lot of harsh words on his competitor, short of calling Apolinario a thief and "estafador."

They shouldn't blame him or the government, Quiboloy said, for the Kapa members's plight. Blame Apolinario, the KJC leader said, make the Kapa chief return the people's money. When asked to comment on a report that Kapa members would physically gang up on him, Quiboloy said they should "dumog" Apolinario instead.