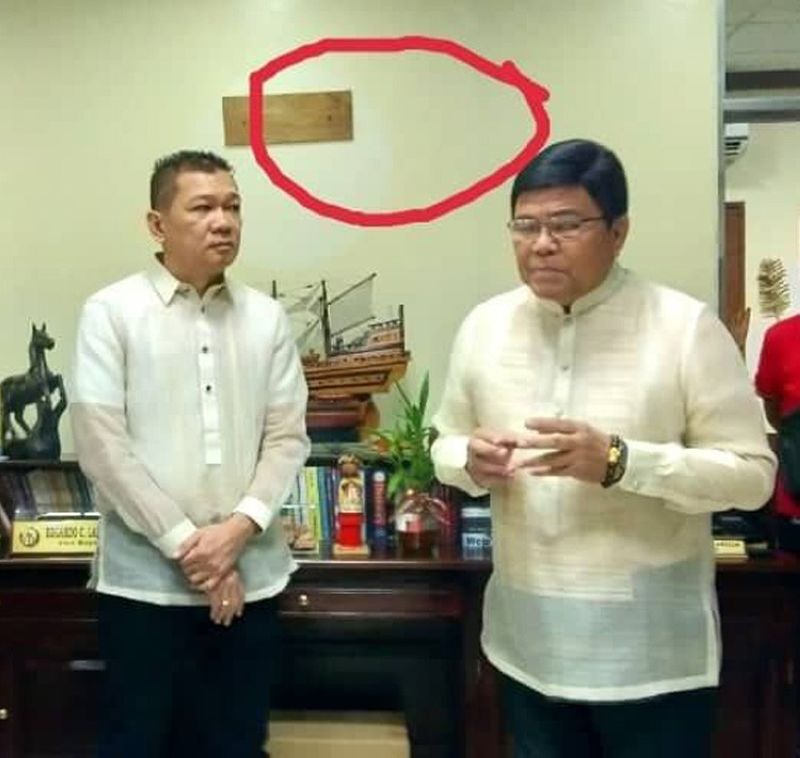 CEBU. Cebu City Mayor Edgardo Labella (right) and members of the staff are still baffled as to the whereabout of his office's seal. Labella said the Seal of the Mayor is important because this is the symbol of authority. (Fe Marie Dumaboc of Superbalita Cebu)

THE Seal of the Office of the Mayor is missing.

Apparently, it was not just the water, plumbing and electrical connections, ceiling, tiles, cabinets and the toilet bowl that went missing from the City Mayor’s Office once occupied by former mayor Tomas Osmeña. Its most important object - the Seal of the Office of the Mayor, was nowhere to be found.

On Tuesday morning, Labella discovered that the seal was one of those that disappeared from the mayor’s office, just as he was about to administer the oath of Councilor Jerry Guardo. Mayor Labella is currently occupying the Office of the Vice Mayor.

But, as it turned out, his staff said the Seal was one of those missing after Osmeña’s office at the 8th floor of the annex building was vandalized.

They searched for it for about 20 minutes until Labella decided to proceed with the oath taking sans the Seal.

Interviewed after the ceremony, Labella said the Seal is an important fixture because it is the symbol of authority in the City.

He added that the seal was donated so it is therefore a property of the City Government of Cebu, not a personal belonging.

He, however, does not want to put blame on Osmeña but he said the toilet bowl was also lost.

“We were looking for it, but until now we haven’t seen it. I thought, only the (toilet) bowl was lost. Dili man maayo nga mamasangil, but in the same manner nawala man sad ang bowl,” Labella said.

He ordered his staff to thoroughly check places where it could have been placed as he said he will leave it to the City Legal Office to decide on a legal action.

Osmeña, who is currently in Hong Kong, told Superbalita Cebu that he will look into the issue once he returns to Cebu City. (from FMD of SuperBalita Cebu / VLA)