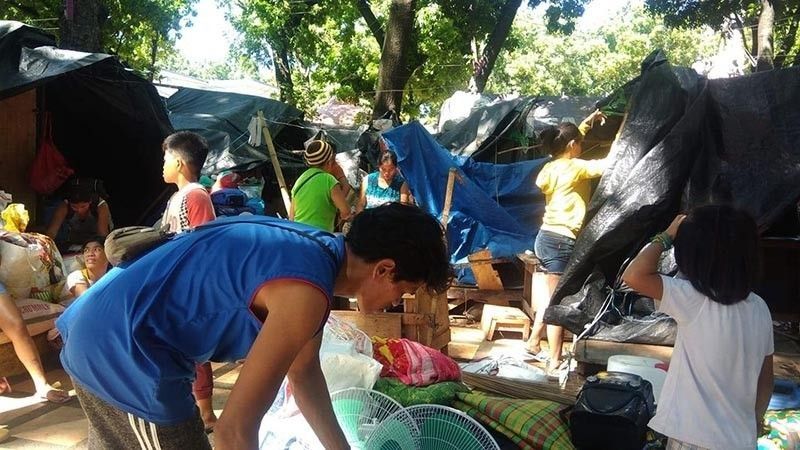 CAGAYAN DE ORO. Residents of Sitio Camansi, Lagonglong, Misamis Oriental who evacuate to the capitol compounds of the Provincial Government in Cagayan de Oro pack their things as they are told by the administrator to leave the vicinity. (Alwen Saliring)

CAGAYAN de Oro City Mayor Oscar Moreno said Lagonglong evacuees are welcome to stay in the city as long as they follow the laws.

"Dili man ta mangabog, ang ato is we honor the freedom of the abode," Moreno said in an interview.

Moreno said freedom of the abode is guaranteed under the Constitution, therefore any person has the right to shelter.

The 30 displaced families from Sitio Camansi, Banglay, in Lagonglong town in Misamis Oriental have found new refuge at the United Church of Christ in the Philippines (UCCP) in Barangay Macasandig after they were driven away from their encampment at the Capitol grounds on June 18.

The UCCP and Iglesia Filipina Independiente (IFI) churches have vowed to support the needs of the evacuees.

The evacuees were furious and disappointed with the Provincial Government of Misamis Oriental that promised to accommodate and attend to their needs while they are in the city. They refuse to go back to Lagonglong for fear of being caught in the crossfire between government troops and the New People's Army since last year.

Some families already returned to their communities, while military officials said their villages are now habitable.