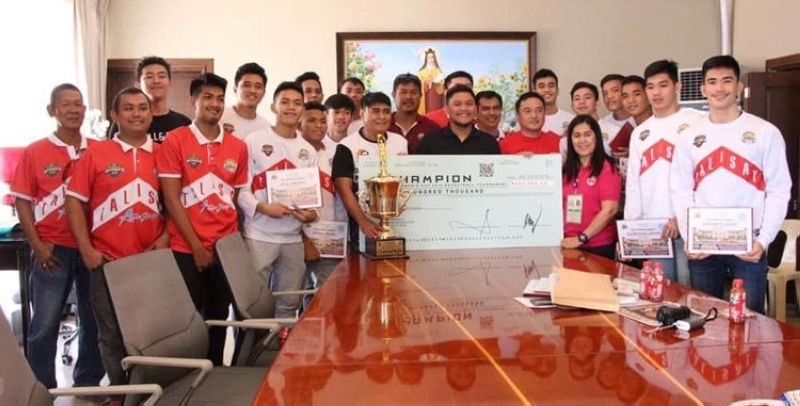 CEBU. Talisay City Mayor Gerald Anthony "Samsam" Gullas poses for a photo with members of the Talisay City Aqua Stars, who were able to successfully defend their title as champions of the recently concluded Governor's Cup basketball tournament held last May. The young Gullas is hoping that the administration of Cebu Gov. Gwendolyn Garcia will continue the yearly basketball league as a way to develop untapped basketball talent in the Province. (Photo courtesy of the Talisay City Public Information Office)

In a statement posted on the official Facebook page of the Talisay City Public Information Office, Gullas said the yearly basketball tournament organized by the Cebu Provincial Government has been instrumental in providing an avenue for young basketball players from various areas in Cebu to develop their basketball skills.

Gullas issued the statement after he personally met with the Talisay City Aqua Stars, this year's Governor's Cup champions, in a meeting at City Hall Wednesday morning, July 3, 2019.

For two consecutive years, the Talisay City Aqua Stars were able to secure back-to-back victories in the yearly basketball tournament.

Gullas presented the team with a P500,000 cash incentive from the city, as well as plaques.

Kendrick Abarquez, a member of the team who was also chosen as the over-all MVP during the last season, also hopes for the Governor's Cup to continue so they can defend their title. (JKV)