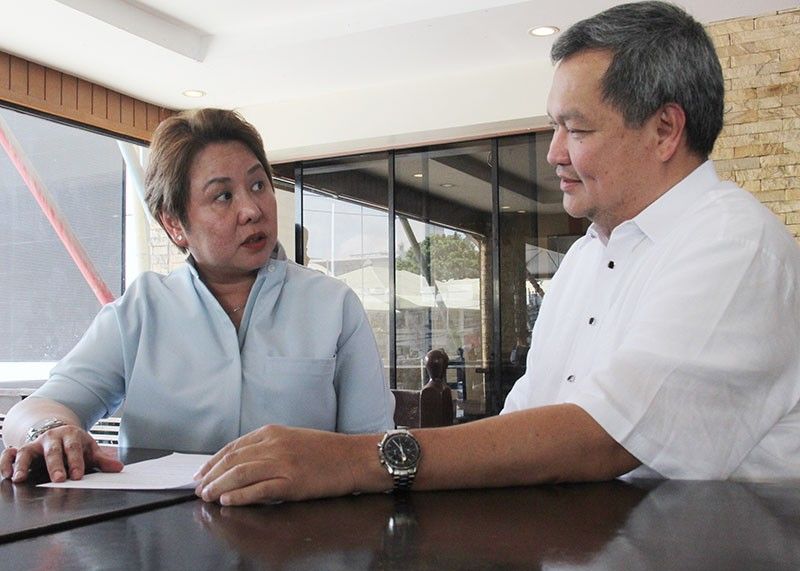 NON-EXISTENT. Customs Cebu head Elvira Cruz ( left ), with counsel Zeus Librojo, is fighting a transfer to what she says is a non-existent office. (SunStar Photo/Amper Campaña)

BUREAU of Customs (BOC) Port of Cebu District Collector Elvira Cruz refused to vacate her post and asked the Court of Appeals (CA) to stop Customs Commissioner Rey Leonardo Guerrero from reassigning her to a non-existing office.

Speaking during a press conference, Cruz, through Librojo, said Guerrero designated Charlito Mendoza to replace her. The order, she said, is in violation not only of CSC laws but also of the 1987 Constitution.

Librojo said that when Cruz brought her case to the CSC, both its regional and central offices ordered that, pending an appeal of her reassignment, a status quo shall be observed. This means Cruz must remain in her post, he said.

He said that, instead of respecting the CSC order, Guerrero and Mendoza allegedly used military men, including personnel from the Philippine Coast Guard (PCG), to ensure the takeover of Mendoza, and barred Cruz from entering the BOC compound.

For his part, Lt.JG Mike Encina of the PCG-Visayas said they were just following orders from higher authorities to augment the BOC security.

“This is not a fight of Atty. Cruz alone but of all civil servants in the country. Superior officers or heads of departments or agencies should always be governed by the rules of law, like CSC. This is a principle that we are a government of laws and not of men,” Librojo said.

“What’s happening here is that Commissioner Guerrero is basically saying ‘this is my kingdom and we’re back to the middle ages. What I want to do, I will do even if it violates the law,’” Librojo added.

Cruz said Guerrero reassigned her to the Collection Monitoring Unit (CMU) which is non-existent based on the BOC organizational structure approved by the CSC.

In the case Cruz filed with the CSC, Director Prisco Rivera Jr. of the CSC National Capital Region issued an order to Jesus Balmores, chief of the BOC Human Resource Management Division, for a status quo.

Librojo said Cruz has the option to just step back but, if she does that, she would be allowing a head of an agency to disrespect the 1987 Constitution. (EOB)