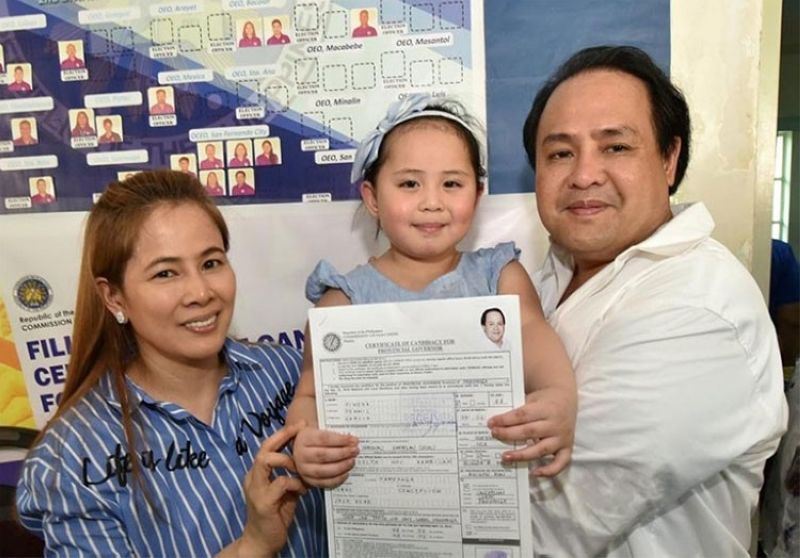 PAMPANGA. Governor Dennis Pineda (right) and his family during the filing of certificate of candidacy. (SunStar File)

He said preventive health medical services include the improvement of the province's medical facilities and services.

The governor's education program include the improvement of schools and expansion of educational assistances in among Pampanga scholars.

"We will also be building up research facilities for our students for their research needs," Pineda said.

Pineda also stressed the need for renewed effort on the peace and order situation in Pampanga. The governor said he will be launching improvements of the facilities of the local police.

He added that logistics capability of the province's local police will be improved in order to boost police response capabilities.

The province's drug abuse prevention and rehabilitation program will be renewed with emphasis on capacity building for drug rehabilitation of reformists and putting pushers into jail.

Disaster management and environmental management is also part of Pineda's agenda with the launching of future programs for mangrove propagation and reforestation activities that would complement the climate change mitigation program of the province.

The governor is also looking at mustering local government support for the solid waste management program through the implementation of segregation programs and cleanup campaigns.

Pineda also said the province will be bracing for the effect of the Rice Tariffication law with needed local government support for farmers.

The province's policies for agriculture will be complemented with assistance of needed technologies and trainings for farmers.

Pineda added that it is time to usher in the modernization of the agriculture sector of the province.

He also vowed to continue social services and assistances for the province's vulnerable sectors. The governor said more basic services will also be made available for indigenous communities of Pampanga.

He said he will echoing the Build, Build, Build programs of President Rodrigo Duterte with infrastructure projects like covered courts, school buildings and road improvements in the province in the next three years.

Pineda is also expected to reorganize the Provincial Government in the coming months.

He said he will push for the Pampanga megalopolis project through the support of former representative Gloria Macapagal-Arroyo.

The 50-year development plan is envisioned to optimize the potential of Pampanga as an urban growth center, as well as address the major issues and concerns it faces.