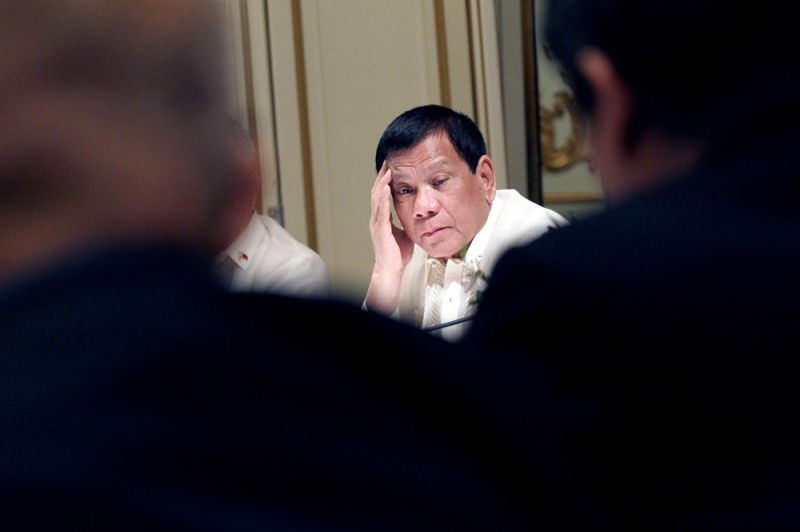 A MINOR glitch in one of the wirings of the airplane carrying President Rodrigo Duterte from Zamboanga City on his way to Davao City Wednesday, July 3, caused alarm to his close-in guards from the Presidential Security Group (PSG). But the President brushed this off and made fun of their concern.

“Kini pud mga PSG, sige’g simhot-simhot, kay amoy pulbura daw (My PSG were sniffing the air saying they smell gunpowder),” the President said, as he addressed the jam-packed Trevi Room at the Cosmopolitan Funeral Homes on Camus Street, Davao City, when he visited the wake of his old friend and presidential photographer Renato B. Lumawag.

“Sabi ko, alangan. Kung pabuthon ang eroplano, pulbura gyud ang gamiton! Let’s just sit down and wait (Of course, if you intend to blow up an airplane, you will need gunpowder),” he said in jest before waxing philosophical to say that people must only worry over things they have control of. A person does not have any control when he is but a passenger in a plane, he said.

Senator Christopher Lawrence T. Go, who was with the President in Zamboanga and the wake, confirmed there was a wiring glitch when they checked the monitors in the plane. But it was one of those regulated by a fuse and thus posed no danger to Duterte.

The President went to Zamboanga to honor Army soldiers who were killed and wounded in an attack by two alleged suicide bombers at the Army tactical command post in Indanan, Sulu last June 28.

Posthumously awarded the Order of Lapu-lapu Rank of Kalasag were Pfc. Dominique Inte and Pfc. Recarte Alban Jr., who perished during the attack.

Duterte conferred the same award on Cpl. Richard Macabadbad, who was one of the Indanan bombing casualties, last Sunday at the Libingan ng mga Bayani Mortuary in Fort Bonifacio where Macabadbad’s remains lie.