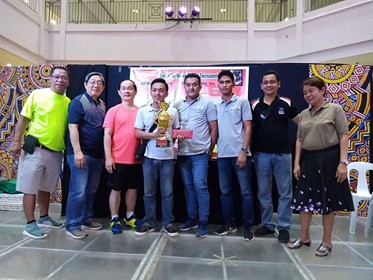 The King Nico chessers, powered by the solid 6 of 7 performance by Llavanes on board 3, won all their first six team matches before splitting the point with second-running Goldcrest Marketing in the final 7th round for the crowning glory.

The GMC wards of National Master and businessman Roly Tan produced just 2 points on board 3, but Arroyo scored heavily on board 2 (6.5/7) to pave the way for the 41-year-old Balquin's biggest "payday" in his colorful chess career.

"Balkimir (Balquin) is reputedly the most successful local player in the three-day chessfest at Ketkai. First, he was 2 of 2 in CDO-MisOr's 19-13 thrashing of the Davao All Stars in the 5th Mindanao Goodwill Match on June 28. Then, he placed third (P10,000) in the Memorial Cup's individual rapid (June 29) and played board one for GMC's P70,000 take-home in the team event," summed up arbiter Lorenzo "Jun" Cuizon.

NM Elorta and company of Team Larry Dumadag went home P45,000-richer, while the Philippine Army--anchored by Cagayan de Oro boys Rapanot and Chavez--bravely fought their way to victory in the final round against MD Chess of blitz expert Ellan Asuela to receive P30,000.

Air Force man Lennon Hart Salgados, the other Kagay-anon aside from Balquin who made the top-10 circle in the individual rapid chess, was undefeated in his first six matches on board 2. But with his teammates floundering on the other boards, Salgados' Team Kier miserably failed in its quest for the top team honors.

This, even that the Grandmaster candidate Dimakiling delivered a perfect 7 of 7 performance on board one.