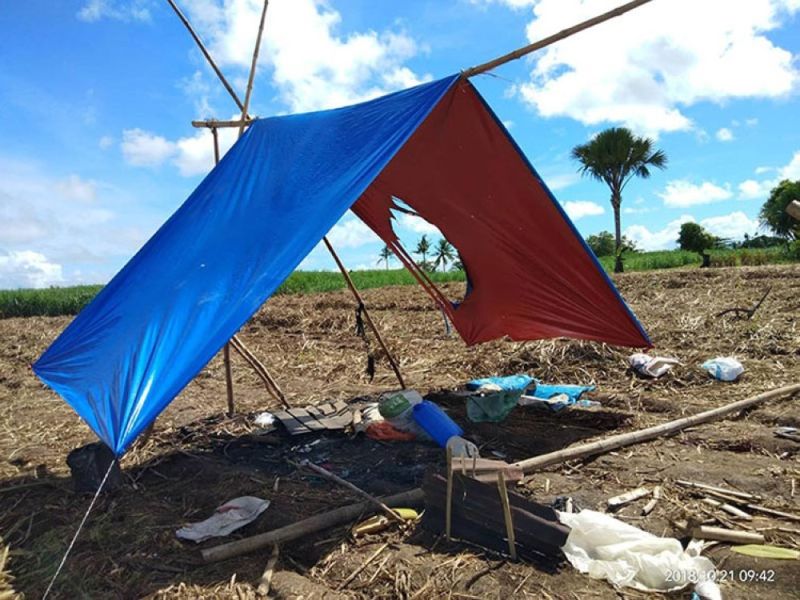 NEGROS. This was the makeshift tent that sheltered nine members of the National Federation of Sugar Workers when they were shot dead in October 2018. (File Photo)

FOR the third straight year, the Philippines was listed among the top 10 worst countries for workers by the International Trade Union Confederation (ITUC).

This year, the ITUC Global Rights Index cited the Philippines for "violence and murder, brutal repression of public protests, and repressive laws".

In 2018, the Philippines was also in the top 10 worst countries for "intimidation and dismissals, violence and repressive laws".

The Philippines first entered the list of top 10 worst countries for workes in 2017, along with South Korea and Kazakhstan. That year, the Philippines was cited for "violence, intimidation and murder, discrimination and dismissals, and repressive laws".

Labor Secretary Silvestre Bello III on Friday, July 5, 2019, balked over the results of the ITUC Global Rights Index 2019 and challenged the group to identify the 43 slain union leaders who were allegedly killed under the Duterte administration.

"I take strong exception to the claim of this International Trade Union Confederation," said Bello.

"Name the place where he or she was killed, when was he killed, why was he killed. None. Obviously, it was illusory and imaginary. I don't know what their intentions are, but I really take exception," he added.

The labor chief said there were only four labor leaders killed under the term of Duterte.

"ITUC has been saying there are 43 cases. Unfortunately, they cannot even give the names who are these 43," said Bello.

"Obviously, this just a black propaganda being used by this Confederation," he added.

Based on the ITUC Global Index 2019, the Philippines received a rating of 5, which means there is “no guarantee of rights” for workers.

The index noted how trade union members were being killed in the Philippines coupled with the brutal repression of public protests.

In particular, ITUC pointed at the death of nine sugar cane workers and members of the National Federation of Sugar Workers (NAMASUFA) last October.

But according to Bello, the killing of the sugar cane workers was not considered as state-sponsored nor labor-related.

"There are no official reports on these alleged killings. Pure allegations. Someone is killed and then suddenly they have this conclusion that they were killed because of their participation in unionism or labor advocacy," lamented the official.

"You cannot consider that as such. You need evidence that these people were killed because of their advocacy for workers' rights or trade unionism nila. But there has been none," added Bello.

ITUC is the world's largest trade union federation with the mission to promote and defend workers’ rights and interests. (HDT/SunStar Philippines)