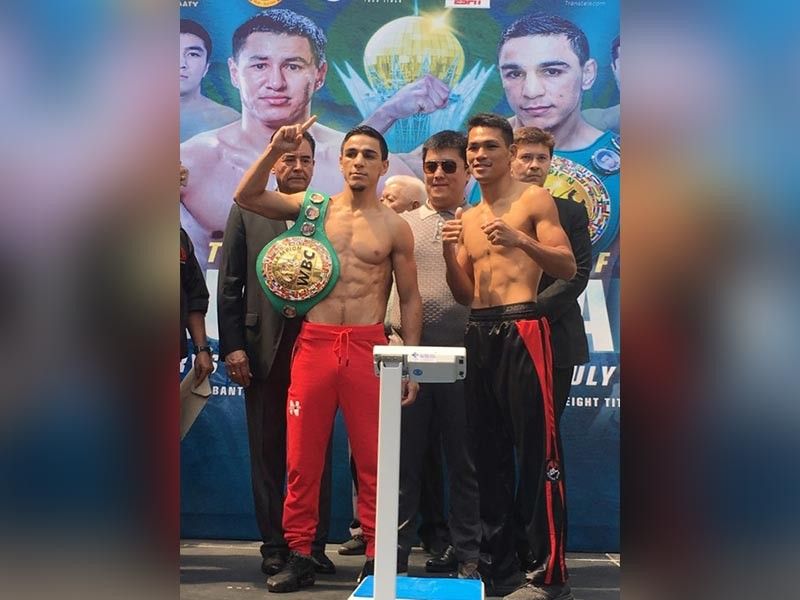 NO. 3. After losing in two previous attempts, Arthur Villanueva (left) is hoping his third attempt for a world title will finally win him one. (Contributed Photo)

DESPITE a long and grueling trip and the stress of losing his luggage that contained all of his gear, two-time world title challenger Arthur Villanueva is focused on his task at hand and achieve his long-time dream of becoming a world champion.

“I don’t feel any pressure. I just have to do my best to win this fight. I’m going to be focused on what we trained and follow our game plan,” Villanueva told SunStar Cebu.

Villanueva traveled from Cebu to Kazakhstan for more than a day, taking stops in Hong Kong, Dubai and Moscow.

The 30-year-old Bacolod native lost his luggage along the way, which put a lot of stress on him just days before the fight. Luckily, Villanueva got his luggage last Friday morning, July 5.

ALA Gym head coach Edito Villamor believes that Villanueva has what it takes to beat Oubaali if he follows the game plan.

“The most important thing is that Arthur needs to fight smart,” he said. “His opponent is quick and is very good. He has to be smart.”

Both Villanueva and Oubaali tipped the scales at the exact same weight of 117.3 pounds.

Villanueva is 32-3-1 with 18 knockouts, while the 32-year-old Oubaali is 15-0 with 11 knockouts. Villanueva has already fought for a world title twice and lost to both McJoe Arroyo and Zolani Tete.

“For me, all my fights are important. But this fight now is the key to my future and my career,” said Villanueva.EKA