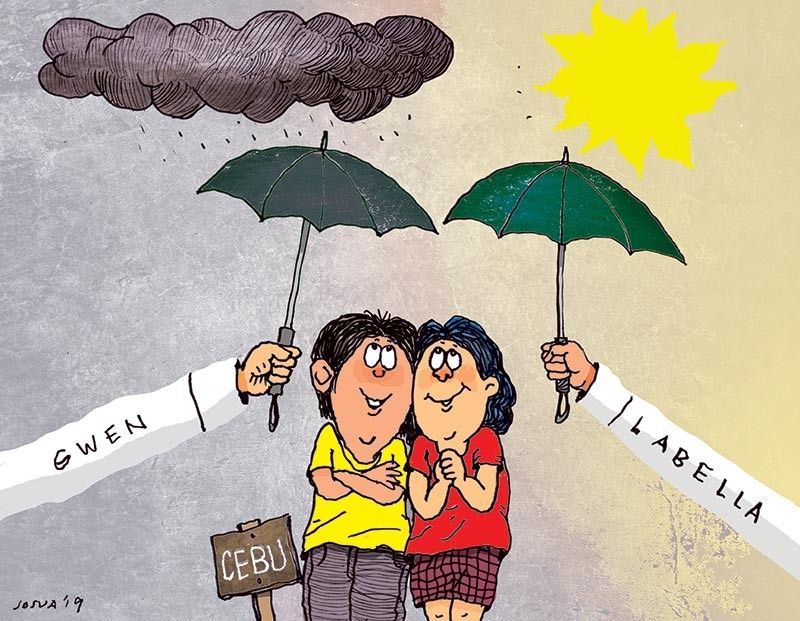 IT HAS almost been a week since elected government officials took over their posts, which they will hold for the next three years.

It’s too early to tell if many of them will keep their campaign promises.

But for barangay health workers and tanods in the province, they’ve been given an early Christmas present when Gov. Gwen Garcia announced last Thursday, July 4, 2019, that she would increase their cash incentive from the Capitol.

In Cebu City, Mayor Edgardo Labella, during his inaugural speech last Tuesday, July 2, bared his to-do-list during his term.

Top on his agenda is addressing urban flashfloods during heavy downpours.

It has become a pressing issue since the weather bureau Pagasa declared the start of the rainy season last June 14 and the rains arrived and the Mahiga Creek overflowed last June 23, sending piles of garbage into the streets of Barangay Subangdaku in Mandaue City.

Then vice mayor Carlo Fortuna blamed the Cebu City Government for not strictly enforcing the three-meter easement rule and the ban on the throwing of garbage in non-designated areas, especially in culverts, for the incident.

“We believe the source of the flood and the source of the garbage could be coming from Cebu City because the outfall of the creek is shared by both cities... In the end, the water flows to Mandaue,” Fortuna had said in Cebuano.

This might explain why Labella made this a priority.

Yet, it’s almost unthinkable to picture Metro Cebu inundated by water before the midterm elections in May.

During the first quarter of the year, several local government units were under a state of calamity after the dry spell brought about by the weak El Niño affected the livelihoods of farmers and fisherfolk.

The Metropolitan Cebu Water District, too, was forced to ration water in some parts of the metro when it could no longer draw water from the Buhisan Dam, which had dried up, and the water level at the Jaclupan Dam in Talisay City had dipped to almost critical level.

Garcia, right after she was elected, suggested tapping the surface water in southern Cebu, which boasts of several falls and rivers, as a viable solution to the metro’s water shortage.

Perhaps, with politicians like Garcia and Labella willing to address the problem head on, residents won’t have to feel parched during the summertime and drenched when the rains arrive.

After all, Cebu and the rest of the country only have two seasons: dry and wet.