Crown with a purpose 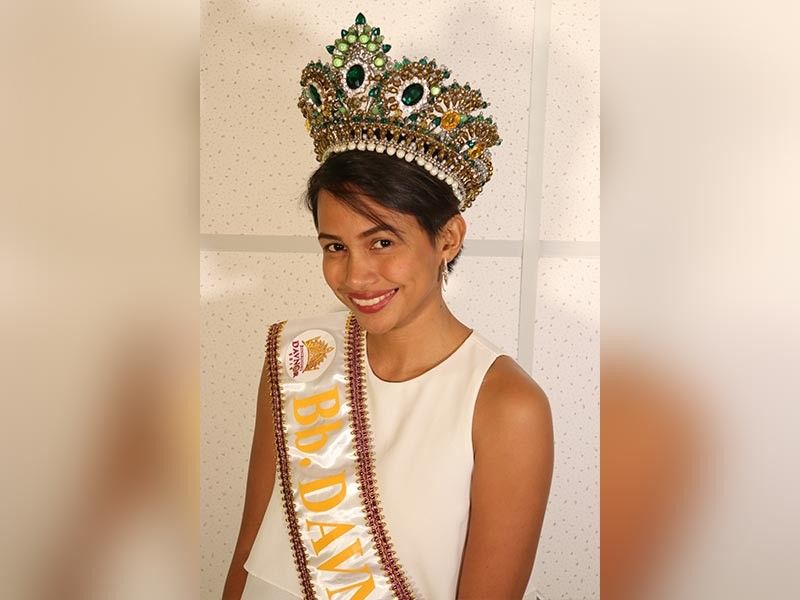 HER love and care for the environment catapulted her to the coveted Binibining Davao del Norte.

Pamela Framil, 24, said she will make things happen and push her advocacy.

“Even before the screening, I actually thought of bringing up my advocacy since Bb. DavNor is a platform with a wide audience that can be influenced on being environmentally responsible. This was one of my motivations. Thus, I will continue to live up to it,” she said.

Before her win in Bb. DavNor, Framil joined various pageants in barangay and city levels since she was 16. And it is not all about sweet victories. Her first crown was Mutya ng Barangay Baliok, Toril.

“I really started in barangay level, I keep on joining so to earn money until 2015 when I joined Mutya ng Davao,” she shared.

She entered the top 15 of the 2015 pageant but luck was not on her side that time as she failed to secure a crown.

“I was honestly heartbroken, I got insecure, and even asked myself: Am I really just good for barangay level?” She said.

She took a hiatus and focused on her study as a working scholar at the Ateneo de Davao University taking up Bachelor of Science in Accounting Technology.

But this didn’t stop her from pursuing one of her dreams. In 2018, she joined the same pageant again and brought home the Sinag ng Davao crown.

“During my stint as Sinag ng Davao, the city really builds us as an ambassadress of the city. I realized that it wasn’t really my time before because I am still immature. If I won in 2015 maybe I can’t meet what is expected of me as Mutya,” she said.

During her reign as Sinag ng Davao, she helped in their Campaign Against Single-Use Plastics (Atsup), which is aimed at addressing the alarming statistics of humanity’s increasing plastic consumption.

After her stint as Sinag ng Davao, Framil stepped up her game to a provincial stage and screened for Bb. Davao del Norte.

“I never really considered the search for Bb. DavNor 2019 as a competition. Instead, it was a journey that needed to be enjoyed and cherished. No pressure was felt because I've got nothing to lose, though I've had mini heart attacks during the show,” she happily narrated.

With her new crown, Framil hopes to speak with the province’s current administration and lawmakers to lobby her advocacy.

“I want to push for an ordinance against single-used plastics, like it will be banned in the market and call people to use eco-bags instead and refrain establishments from using straws and other plastics. Some cities did it already, it would be better if it will also be replicated here,” she said.

She would also use the powerful platform of social media to call the general public into action.

Framil underscored that she focused on this advocacy because it’s doable and realistic.

“Just do little things but if done by many, our collective effort can make big impact,” she said.

On a bigger scale, she also encourages people to participate in environmental activities like clean-up drives and tree planting.

Her love for the environment bloomed after she took on a solo travel in Bukidnon after she graduated. Apart from being a beauty queen, Framil also wears a lot of sashes – mountaineer, free diver, and a barista.

“Being a mountaineer and free diver, I realized that our nature and environment is so beautiful and it is our job to preserve and protect it. I fell in love with nature. And if you love something, you take care of it. I feel like I should do something for the environment and not take it for granted. This is something that keeps me alive,” she said.

Most of her time in 2018 was spent in Dahican, Mati City as a barista in a beach café.

Asked if how she envisions herself years from now, Framil said, she always wanted to own a coffee shop/bar/bed and breakfast somewhere peaceful and serene.

“A lot have messaged me saying "Hi Pam, I'm your number one fan", and it makes me high to know that people I don't personally know support me. But will definitely be feeling in cloud 9 when someone messages me saying "Hi, l bought tumbler for me not to buy single-use water bottles anymore", or "I skipped buying frappes on cafés that use plastic cups", or "I picked plastic trash on the beach",” she said.

Moving forward, Framil plans to elevate her advocacy to a national level by joining Binibining Pilipinas.